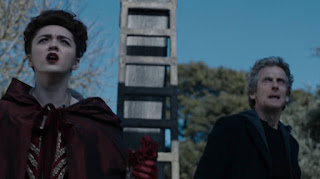 Ashildr (to the Doctor): "My own companion. Singular. Unattached. Alone."

And to slightly prepare for the fact that we are going to have a future with the 12th Doctor that will not feature Clara, this episode not only saw the English teacher being relegated to only just a scene at the end where her impending exit was further hinted at but also saw the Doctor being reunited with a familiar face in a different time.

It's interesting that the show decided to address the consequences of giving Ashildr immortality straightaway rather than leaving it for later in the series or even the next one but nonetheless, the Doctor's jaunt to 1651 England saw him coming face to face with legendary highwayman known as the Knightmare or better yet, Ashildr, who is initially surprised then annoyed to see the Doctor once again.

It seems that in the 800 years since their last meeting Ashildr has lived many lives and gone by many names and loved and lost various children and other people, which has been enough to harden her and steal from the rich as a means of excitement and also something to provide a bit of conflict with her and the Doctor.

Another thing to provide some conflict in this episode would be an alien amulet that Ashildr and her accomplice, Leandro (or Lenny the Lion if you're feeling childish) are both after, only with different motives but then again, so is the Doctor. The dilemma however stemmed from the fact that in order for the amulet to be used to help Ashildr and Leandro get out of 17th century England, someone has to die instead.

The would be sacrifice in question came in the form of rival highwayman and general numpty, Sam Swift as played by Rufus Hound. Silly risque jokes aside and a kiss scene I could've done without seeing, I have to admit that Swift is one of my least favourite guest characters in a while and I wasn't particularly heartbroken over the idea of him being used as potential cannon fodder to further the plot this week. However as soon as Leandro's evil (and predictable) intentions were revealed, it didn't take much for both the Doctor and Ashildr to put their issues to one side, band together to save the day and potentially give Swift a new lease of life to boot.

The strength of this episode was it's dealing with immortality. The Doctor's motives for not wanting to travel with Ashildr made enough sense and harkened back to some of his conflicting past issues with Jack (who rightly got a mention in this episode) and I liked that Ashildr understood that in the end. I also liked the way the both of them talked about mayflies and how that tied into Clara as well.

Also in "The Woman Who Lived"

This is the first time since Series 4 that we've had a female writer for the show. We've also got Sarah Dollard's episode to look forward to in a few weeks time too.

Ashildr went by the name of Lady Me in this episode. Maisie Williams is even credited as Me in the closing credits for this one.

The Doctor: "How many people have you killed?"
Ashildr: "You'll have to check my diary."

The Doctor: "What could be worse than losing your own children?"
Ashildr: "I keep that entry to remind me not to have any more."

Lady Me had a loyal servant named Clayton, who she initially was going to use for her scheme before deciding on Swift.

Ashildr (re Clara): "Why haven't you made her immortal?"
The Doctor: "Look how you turned out."

Ashildr (to the Doctor): "I'm not looking for a husband, you oaf. I'm looking to get out of town."

Ashildr: "You didn't save my life, Doctor. You trapped me inside it."

Sam: "What are you playing for my lady?"
Ashildr: "To make it quick."

There was a nice reference to the Terileptils from the Fifth Doctor story, The Visitation.

The Doctor: "I think I'm glad I saved you."
Ashildr: "I think everyone will be."

Clara: "So where are you gonna take me?"
The Doctor: "Wherever you want."

Chronology: 1651 England and 800 years after the events of The Girl Who Died. Ashildr will be back in Face The Raven, folks.

This was certainly an interesting episode. The Woman Who Lived wasn't strictly a concluding part to a two parter story like the first four episodes have been but given how prominent Ashildr was and how vital the events of the previous episode were too, it wasn't exactly a total standalone either. Some of the humour misfired a bit (anything from Sam Swift) and Leandro was another great looking but slightly wasted alien antagonist. However the episode had a superb team with both Peter Capaldi and Maisie Williams delivering wonderfully and it was nice to see the consequences of one person's immortality getting a satisfactory exploration too.