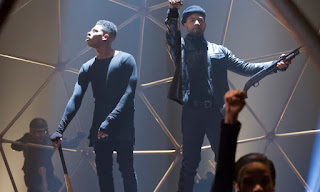 Written And Directed by Danny Strong

Hakeem: "Why y'all look shocked? This family never been a real family. I'm outta here and I ain't never coming back."

And this is the moment where Lucious ended up looking the better person than Hakeem in comparison this week. I get Hakeem has got some lingering issues but his whole entitled attitude over Jamal being the heir apparent really grated in this episode - a lot.

Whinging about an arguably naff painting of Jamal aside, the actual fact that Hakeem attacked Jamal during the video shoot they were doing was beyond pathetic. Lucious is rarely right about his sons but pointing out that Hakeem needed to grow up was one of those moments where he was absolutely spot on but going by the trailers for next week, it does seem like Hakeem won't be growing up anytime soon.

However he did manage to spot a potential new singer at a random bar, so maybe Hakeem might learn something from his recent experience with Mirage A Trois. As for relying on Cookie - I hate to admit it but Lucious might be right. Lyon Dynasty really does seem like it's going to be a short lived venture. Same with Anika too - she should be looking elsewhere for future employment.

Speaking of Cookie, when she wasn't having her place raided (as was Lucious and Empire), she was arrested and practically forced by Roxanne to betray Lucious in order to protect her sons. For the first time this season, I really felt this episode truly nailed Cookie in every way - her spiky banter and her vulnerability and Taraji P. Henson really delivered in this one.

Of course, it wasn't just Cookie at her most vulnerable in this episode. Both Andre and Rhonda have managed to give Lucious so much power over them by showing them Vernon's body and confessing that Rhonda killed him. While I wasn't too surprised that Vernon ended up in the front seat of Roxanne (who really was an almighty bitch in this episode), I also have the horrible feeling that Lucious is going to use this revelation in relation to his grandchild as the season progresses.

As for the rest of the episode - I did like the creativity of the Rolling Stones photoshoot and painting with Jamal and the frazzled looking artist/photographer, Chase. Of course this also seems like a plot that might go somewhere a little more sinister if some of the spoilers are anything to go by.

Mimi's motivations for buying Empire had something to do with having fun after her remission. Cookie referring to her as "White Bitch" and "KD Lang" weren't her smartest quips.

Lucious (to Roxanne): "Hi there baby. Look wherever you like."

Aside from being something of an overzealous irritant, is there any other motive as to why Roxanne is so determined to get Lucious behind bars?

Mimi: "This is how players play to win."
Lucious: "That's what I'm talking about."

Adam Busch played the role of Chase the photographer in this one. Given that Danny Strong wrote and directed this one, it was a sort of Buffy The Vampire Slayer reunion in a way.

Andre looks like he's on the verge of a nervous breakdown with each episode. I like that we're seeing Lucious's mother in flashbacks too but I wish he'd tell Andre about his grandmother.

Cookie: "If I die in police custody, I did not commit suicide."

Lucious: "You sure about that momma's boy?"
Hakeem: "Call me that one more time, you'll see what happens."

Aside from looking a bit jealous about Chase's interest in Jamal, Michael has yet to do or say anything interesting this season. The guy needs any character development right about now.

Chase: "This is what it should say."
Jamal: "What? That I should have my throat slit?"
Chase: "Yes. It represents violence and anger of a racist and homophobic society. It's genius."
Michael: "Yeah, really powerful."

Standout music: Jamal's "Battle Cry" at the start of the episode and of course, Jamal/Hakeem's "Aint About The Money".

Lucious (to Vernon): "You will rot in hell you snitch."

Chronology: Not long from where "Fires Of Heaven" left off.

Easily the best episode this season. "Poor Yorick" was just brilliant from start to finish and it really pushed so many plotlines this season as well. If some of the first few episodes (last week's mainly) didn't have quite the same punch as the first season, this one more than did.