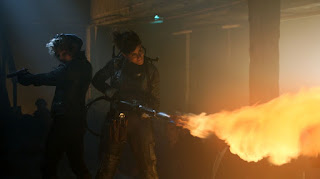 Selina: "You don't sound like yourself."
Bridgit: "I'm not myself anymore. I'm free, just like you told me."

Six episodes in and these mini arcs that the show seems intent on doing have been such a godsend. While this arc might have been shorter than the Maniax one, Gotham finally made me interested in Firefly as a character where previous iterations haven't quite mustered it.

In this episode, we saw Selina determined to help Bridgit in the best way possible. First by getting her to rob a sex slave den so that Bridgit could get enough money to leave the city but when she got caught by her awful brothers, Selina reluctantly agreed to help Gordon in order to help her own friend from making a massive mistake.

Of course, Selina was too late. Bridgit got a taste of power and tired of being terrorised by her brothers, she decided to kill them before going back to rescue the girls from the den and punish the men. Unfortunately this was where everything went to pot and Bridgit became a victim of her own success and ended up being set alight as well.

While this resulted in things becoming more hostile between Gordon and a disillusioned Selina, it actually turned out that Bridgit survived her burning and has not only become fireproof (her suit melted into her) but she's also underground Indian Hill (remember that?) in a creepy place where it looks like some superpowered potential threats are being housed.

Of course Bridgit's story wasn't the only one to take such a deadly turn in this episode. Nygma's relationship with Kringle finally looked like it was going to progress to a lovely place until he decided that confession was good for the soul. It seems that learning your current boyfriend bumped off your former abusive boyfriend is a bit of a no-no for Kristin.

Unfortunately it also led to the annoying trope of Nygma inadvertently killing Kristin, which I really wished the writers had avoided. I know Kristin was probably going to die at some point and that her death would be a thing to tip Nygma over the edge but why did she have to die at his hands? Not all of Batman's rogue gallery of villains are serial killers. I really wish they wouldn't go down that route with Nygma when they're being creative with other villains.

As for the other plots this week - we did have Oswald and Butch working their way into getting back Gertrud as the latter managed to get in with the Galavans before getting the crap whipped out of him by Tabitha. On the plus side, at least Oswald and Butch know where the former's mother is being held but six episodes in and I still don't have a good handle on Tabitha. Aside from being a bit of a sadist, the writers haven't really done anything interesting with her yet. Theo on the other hand, continues to be interesting and this week, he really did work overtime to get into Bruce's good books.

Also in "By Fire"

Not going to accuse this show of sexism but despite the feminist talk, there was a lot of stuff that jarred - Tabitha still not having anything decent to do, Kringle's too quick death and Leslie being a captive yet again.

Barbara recalled her previous encounter with Butch when he was trying to get in with the Galavans.

Selina (to traffickers): "And for the record, y'all suck."

Silver reappeared in this episode. I don't think it's too much of a stretch that she's a willing pawn in Theo's overall scheme. Oh and it was nice seeing Ivy too.

Bullock: "Should I call the children's home or get a candy bar and have someone forget to watch you?"
Ivy: "Candy bar."

Selina: "No offence, Jim but I like my chances better than yours."
Gordon (re Bridgit): "Why get involved? Why risk your neck? Who is this girl to you?"

We saw the beginnings of an eventual ethics clash between Gordon and Barnes in this episode as well. The latter's black and white approach is going to be a problem later on I bet.

Oswald (to Butch): "Go find my mother before I chop off your other hand."

Chronology: Not long from where Scarification left off.

An interesting episode most definitely. By Fire mostly concluded the Firefly arc for the time being but it set up much more of interest though - Indian Hill's experiments, Nygma's further descent into darkness, a future conflict with Gordon/Barnes and Theo getting his claws into Bruce.