My Review of Brothers And Sisters 4x09: "Pregnant Pause" 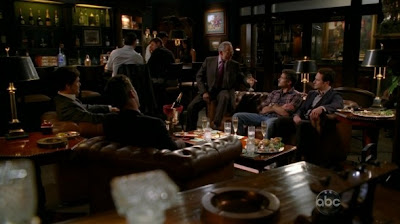 Every time Justin and Rebecca argue, an audience member weeps – because it’s a reminder of why they question the fact that these two are together when they seem to do nothing but bloody argue all the time. Even I’ve gotten whiplash from the amount of times that these two have argued since becoming an item.

And it’s funny because this episode had Justin talking to Saul about losing Rebecca as a best friend due to all the wedding chaos but the only time they’ve ever had that kind of a rapport was when they thought they were siblings. Things were simpler back then for both them and us as an audience. Now all they do is just bicker and bicker all the time.

Also when did Rebecca become so passive aggressive? Telling David that she’s pregnant is totally fine but I just hate the way that she tried to conceal it from Justin as long as possible while raising so many alarm bells that something was up with her. If Kitty hadn’t been at the dress fitting with her, we’d have to wait another episode where the Walkers weren’t privy to Rebecca’s condition.

I liked the scene where she confessed to Kitty because it showed a nice closeness but I wished that Kitty had kept it to herself instead of automatically telling Robert over the phone or at least made some effort to tell Rebecca that telling Justin would be a lot better than everyone else finding out and gossiping about it beforehand. Just a suggestion.

But instead not only does Kitty go and tell Robert but Robert clearly has developed his own inability to keep schtum about things and told Kevin, Scotty and Saul at Justin’s really lame bachelor party about Rebecca’s pregnancy. Really great timing there, Robert. What was it you said last season about a filter? Where was yours tonight?

Not that Justin himself reacted particularly well to Rebecca’s little bombshell. I don’t think there was ever going to be a good way of telling him but Rebecca pretty made the mistake of blurting it out in the heat of the moment. Justin naturally got angry and stormed off before later telling Rebecca that he wanted the baby.

You don’t have to be a genius to know he’s lying because in between their usual bout of fighting and making up, Justin actually did tell Robert that he wasn’t ready for children and that he didn’t want the baby. No surprises with that then. Inevitably, when this is revealed, it’ll be another thing to widen the gap between Justin and Rebecca.

Similarly Justin himself hasn’t exactly been a font of honesty either. Flunking his exams after trying to put the work in, I get how that would seriously upset him but if he can confide this with Saul, then surely it has to be easier to tell Rebecca than the rest of his family, right? Well, better than the way he did behave anyways.

Drinking champagne on his own bachelor party would’ve been fine if he wasn’t a recovering addict and then didn’t go nuts on Kevin when the latter rightfully took issue with his drinking. Justin probably should’ve been glad that Tommy wasn’t there or that fight would’ve been way worse than it had been.

We really should be at the stage where as sceptics, that we should have some emotional investment in Justin and Rebecca as a couple but all these episodes have continued to show us that both are not ready to be parents or married and that sucks, both for them and us as viewers.

It also doesn’t help that their wedding is a financial ticking time bomb for Holly as well. I hate to admit it but Holly hasn’t been that grating in recent episodes. Even when she and Nora argued here, I could almost see Holly’s perspective for once and strangely enough, both of them actually managed to find a compromise to the wedding finances faster than expected. Well, the wedding is the next episode so that made sense.

Plus, Holly does earn her pointers here. She was supportive when she realised that Rebecca was pregnant, gave her some reasonable advice in regards to Justin and even though I don’t really care about Ojai’s latest blunder, she investigated a little into the sabotage and backed off when Saul advised her to. Wow, I don’t think I’ve ever praised Holly that much in an episode. Maybe the writers are changing my mind with her.

Speaking of mind changing, Kevin – less pouting. So what if Scotty’s swimmers beat yours? It’s hardly the end of the world and we’re already aware that your little guys are capable of causing reproduction, so less with the whinging already. Besides, Scotty wasn’t exactly being unbearably smug about winning out either might I add.

Also with Scotty, nice to see him in some scenes with Sarah, who this week took an instant dislike to Simon. Confirming the whole ‘too good to be true’, it seems that Simon’s got negligence cases against him that Nora was aware about but the big deal happened to be Simon lying about when these cases had come his way.

Doctors might get sued all the time but it is something that I do think is a big deal. Mistakes can made but when they’re professional ones, I don’t think I’d have been so casual about them, so in other words, I don’t blame Sarah for taking issue with Simon but it’s a shame too because once again, Nora’s love life starts and stops almost at the same time.

Why can’t the writers give her a stable love interest? Holly has one for crying out, so why can’t Nora? Do you know how better it is watching her actually having fun and not running around after her adult children all the time? A lot! And I bet Sally Field would like to have an on screen lover that lasts more than four or five episodes a year as well.

This episode was directed by Matthew Rhys, making him the first regular actor on the series to helm an episode.

Robert: “Did your mother pass away in the night?”
Kitty: “Of course not. I just walked in on her and Simon in the shower together naked.”
Robert: “Good for her. It’s a whole new day in Pasadena.”
Kitty was starting to wear scarves on her head in this episode. Robert’s comment to Justin about fearing for her life was powerful.

David (to Holly, re Justin/Rebecca): “They’re starting a life together. Don’t put this wedding at risk because of your pride.”

Kitty: “Are you pregnant?”
Rebecca: “Yeah. Kitty, you can’t tell anybody.”

I’m surprised the writers didn’t draft Balthazar Getty in this episode, even though Justin’s stag do was a last minute thing, courtesy of Robert.

Robert (to Kevin/Scotty/Justin/Saul): “What kind of conversation is this? This is a bachelor party, not The View.”

Justin (to Saul): “I miss Rebecca. I miss what we used to be. I feel like we’ve gotten caught up in all this wedding stuff and I’ve lost my best friend.”

This was another episode not to feature Ryan. I bet Luke Grimes must be loving the way he’s being used on this series.

Holly: “I just wish we had the kind of relationship that you felt safe enough -”
Rebecca: “No, that’s not it either.”

Standout music: “I Have Loved You Wrong” by The Swell Season.

Chronology: Around November 2009. Rebecca said she was seven weeks pregnant in this one.

Strange episode. “Pregnant Pause” certainly gave me some moments to pause for and there are some great performances but it’s hard to get invested with Justin and Rebecca when they seem to make no progress and it doesn’t help that we had another episode where Kevin and Scotty disagreed on something baby related.

Rebecca and Justin do fight a lot don't they?! If only we could go back two years and reverse the bizarre decision the writers made to de-sibling Rebecca and pair her with Justin. Sigh.
I wrote something similar in my review about Justin and Rebecca not being able to talk to each other. Doesn't bode well for them.

It did seem out of character for both Kitty and especially Robert to reveal Rebecca's pregnancy. Not sure at all why Kitty needed Robert's opinion about her family, she never has before and Robert didn't even have to be cojoled into spilling the beans. The others didn't really need to know.

The amount of times that they fight has gotten ridiculous. I'm not saying they should be happy every episode but there needs to be a better balance with them as well.

It was extremely odd for Robert to blurt out about the pregnancy and the others didn't need knowing, not until Justin was aware.

I am still enjoying this season though. It's as good as the first one.