My Review of Dollhouse's 2x12: "The Hollow Men" 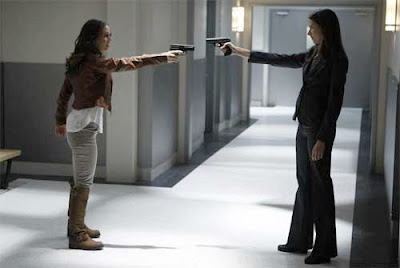 Caroline: “How do I even know I can believe you?”
Boyd: “It’s like I said, you’ll learn to trust me.”

And don’t I wish that Sci-Fi hadn’t gone all triple bill on us during that last week with this show? Well, that and I wished that I hadn’t been ill either so I could’ve seen this episode much sooner and been amazed by it. And amazed I was.

Boyd as the founder of Rossum is still a hard thing to grasp because even in the flashbacks with Caroline, he’s showing a certain level of affection that seemingly cannot be faked. Yes, there were some more platitudes about how special the girl is and now we know – it’s in her spinal fluid.

Actually, the key to being immune to being automatically wiped and made into a Doll is Echo/Caroline and it certainly seems to explain a lot. From what we’ve already been seeing, it’s not remotely shocking that the girl’s physiology would be different in the literal context to any other Active.

She’s been put through the ringer long enough and apart from herself and Alpha, there is the argument that not many people would survive physically, never mind mentally with 40 different voices in her head. And Boyd was going to use that fluid so that a select few along with himself wouldn’t be abused by Topher’s advancement.

Which led to the interesting part – Boyd. I could gush about how brilliant Harry Lennix is in this episode but that’s too obvious, so I’ll focus on some other stuff instead. First off all, the select few – Echo, Adelle and Topher. All pretty obvious candidates to keep on side and also his strongest allies/opponents depending on how things could’ve gone down.

Also all of them overcame massive odds that Boyd had put in their path – Topher’s moral compass, Adelle’s underlying strength against Rossum, Echo’s process into becoming an actual person. No wonder Boyd wanted this lot on his team for the final days. I’d have chosen this lot a lot as well.

Then there are his claims of loving them. Can a sociopath ever be capable of love? I can believe that Boyd’s admiration of Adelle, Echo and Topher is true but I’m not sure of actual love itself. Even when the chips were down, he still had no problem with Echo dying provided that he could still drain her of that fluid in her spine.

As for Boyd’s fate – certainly one of the nastiest things the series has done but deserving no less. Reduced to a Doll like state by Topher and made blow himself and Rossum up by Echo, Boyd was never going to make it out of the series alive but I did think that his death would’ve been delayed until the next episode.

As deaths go, it’s more dramatically effective than it should be. I totally would’ve killed Boyd myself had I been in Echo’s position but I couldn’t help but feel sad to see him die. This was the man who basically acted like Echo’s father and protector and who most viewers trusted as much as Echo and the rest of the gang did themselves. Plus Harry Lennix was just brilliant in this episode with his performance. Easily his best in the series.

The reveal to others of Boyd’s betrayal also had the necessary devastating effect. You could tell that neither Adelle nor Topher anticipated that it could ever be Boyd and even Paul looked dumbstruck by it as well. Paul also had a gun pointed to his throat when that particular revelation was being spilled out.

Paul was another interesting point in this episode. The way Boyd talked about him being the relative that everyone tolerated but didn’t like made me laugh. He really was that character on this show. And I feel bad for Tahmoh Penikett because he’s not a dreadful actor but Paul never seemed to click emotionally for a lot of viewers.

But still Paul did have his moments in this episode. The main ones were trying his best to keep Mellie safe, even when Boyd set off her trigger and she tried to kill him. I wish we had seen Paul be more careful with her feelings in the first season (aside from the obvious times) but even he couldn’t stop Mellie from shooting herself.

Two deaths before the finale and I just know that there will be more but yeah, Mellie’s got to me more than Boyd’s. I know “Epitaph One” more or less hinted that she hadn’t a good outcome but I was hoping that this episode would’ve denied it. And then there was Claire as well.

Instead of a trigger, Clyde 2.0 was wearing her body and oozing every bit as much as callousness as he could in the body of Boyd’s lover. Amy Acker certainly made sure that there wasn’t a shred of Claire in this episode as Clyde saw Echo as little more than a lab rat and happily took a few swipes at her.

This episode had some memorable fight scenes – Echo vs. Boyd and Echo vs. Clyde 2.0/Claire. I think out of the two, I preferred the former because Echo certainly couldn’t handle being betrayed by Boyd but still didn’t hold back in her anger towards him either. It’s probably a good thing that Topher intervened with the remote wipe when he did then.

As for Tony and Priya, no way were they going to go off and abandon Echo. Nope, they’d have to go in the Dollhouse long enough for Tony to be Topher again and long enough for the both of them to learn of Boyd’s betrayed. I laughed when Priya said that her, Tony and Echo were family mainly because Boyd distorted the word for Echo a few minutes prior to Priya and Tony’s rescue of Echo.

And the apocalypse still came after all. Blowing up Rossum was never going to be enough but at least they set up the gloomy future and if the finale is anywhere near as good as “Epitaph One”, we’re going to be for a fantastic send off to the series.

Also in “The Hollow Men”

Caroline flinched when Boyd mentioned a certain relative at the start of the episode. I wonder who they were talking about.

Tony (to Priya): “Looks like the war started without us.”

I thought it was brilliant that while Topher didn’t have a problem with Tony’s body, he had great admiration for his own. I don’t know why but I liked it. Weird, huh?

Paul: “How do we get inside, Boyd?”
Adelle: “We walk in through the front door. There’s no need to sneak around. We have something Rossum wants.”

Props to the costume department for Amy Acker’s slightly androgynous look as Clyde 2.0. I hope she fares better TV wise on Happy Town though.

Adelle: “Caroline’s going to save the world?”
Clyde 2.0/Claire: “No, no, not the world, just the deserving few. You’ll be happy to know you’ll be counted among them.”

Tony/Topher (to Priya, re Boyd): “That dude can act. I don’t know if I want to kill him or get his autograph.”

Tony did get upgraded with some super soldier skill prior to leaving the Dollhouse again but Priya didn’t want to be upgraded, not that I blame her.

Clyde 2.0/Claire (to Echo/Adelle/Topher): “I have enhanced weapon skills. Anyone care to see a demonstration?”

Boyd (to Echo/Adelle/Topher): “You’re here because you’re my family. I love you guys.”

How did Boyd really feel about Claire? I’m guessing not a lot if he was fine with Clyde having her body.

Echo (to Priya): “Will you do me a favour? Call us whatever you want but just not family.”

Surely Clyde couldn’t have survived that blast to Rossum, even if Claire’s body managed to?

“The Hollow Men” was a bloody terrific penultimate episode. Definitely worth catching up for and I’m certainly not going to wait any longer to go and watch “Epitaph Two: The Return” either.

I'm quite sad that Boyd was evil and betrayed them all. This is Joss Whedon, but I don't think we've ever had a human on his shows that has been as malicious and caluclating as Boyd. If we're are to buy into the fact that this wasn't a quick re-write (I don't think it was planned from the get go but it wasn't just written when they knew it was going to be cancelled either), then he has been manipulating them all for so long and doing a damn good job of it too. Creeps me out a little if I'm honest.
His death was brilliantly done though and a clever way to off him.

Paul is so the relative everyone tolerates. I didn't pick up on that but its so true in terms of the character.

Mellie's death was pretty devastating I thought, didn't see it coming and it really shocked and horrified me. Poor Mellie, it was such a sad ending for her.

A lot of people are comparing Boyd's reveal to the one about Twilight's identity in the Buffy comics - partly bad idea, partly cop out. I don't think it's fair though because with Boyd, it does sort of make more sense in light of us not knowing that much about him.

His death was sad but suuitably karmic for what he intended to subject the world to with Topher's advancement.

That line about Paul makes me laugh and laugh, it's just too true for words. But poor Mellie though.

I hope to have Epitaph Two: The Return up tomorrow night.