My Review of Brothers And Sisters 5x01: "The Homecoming" 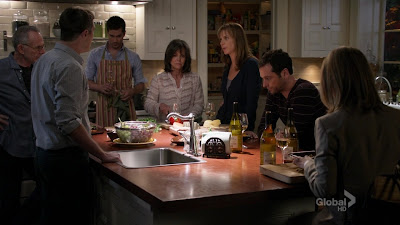 Kitty: “I never thought we’d get back to this table. I can’t tell you how good it felt to have dinner again. We hadn’t done that since the night of the accident. To be honest, sometimes I felt like we’d never get over it but somehow we did.”

And somehow, this was also an episode that raised a lot of mixed feelings for me as a viewer. There were parts of this opener I loved and other parts that I wasn’t so crazy about but overall, I’m glad this show is back on TV for me to review again.

Okay, Robert’s death – or more appropriately, Robert’s year long coma. Was Justin harsh to tell Kitty that he wasn’t getting better? Perhaps, but he was also the only member of the Walkers who was willing to tell her what she needed to hear and while it took a while for it to sink in, Kitty sure as hell needed to hear.

I guess my issue with Robert being in a coma wasn’t from a moral standpoint. I knew Rob Lowe was done and dusted with this show, so it felt like they were prolonging Robert’s death when the episode should’ve been all about his funeral, rather than it being something that we didn’t even see on screen.

I’ve never been the biggest Robert fan in the whole but even I can’t deny the impact his character has had on the series at the same time. Kevin going on about Robert being his best friend wasn’t especially convincing to me but Justin’s talk about him and Robert being like two soldiers was something I actually did believe in. Mainly because it felt more organic.

Also organic was Kitty’s initial refusal to take on a job with the RNC because of Robert’s condition and the hardship she went through when finally coming to the conclusion that she needed to switch off his life support machine. Scenes like that actually made the episode for me as a viewer.

I liked the eulogies at the end of the episode and the family dinner. It’s scenes like that make me care about the Walkers as a family and given that they’re so distant in the majority of this episode, it’s also something of a relief that Justin came home when he did. He might be capable of making his own screw ups but his words were certainly needed with the Walkers this week.

Having Robert’s death being a catalyst for everyone to be distant with each other was something else I could believe but it was pretty damn shocking when even someone as vocal as Nora was unable to get her family back together. I really loved Justin’s speech about wanting his mother back. Maybe an uninvolved Nora is a lot scarier than the usually over involved one that we’re mostly used to seeing on this show.

As for the Narrow Lake plot, I’m really not sure what to make with this one. On one hand, by selling it, Sarah’s ensured that her entire family is financially secure for life but at the same time, it did feel that after all the trouble we had to get to Narrow Lake that the rug’s been pulled from under us with as well.

Okay, I should probably think positively here – no Narrow Lake means (or should mean) no more family business on verge of bankruptcy plots to deal with and after four seasons of them, we’re all due a break but apart from Nora, Saul and Kevin, Sarah doesn’t exactly have a job to go to. Why else would Luc being modelling underwear now to keep them solvent?

The Luc underwear model plot is hardly the most interesting thing they could’ve done with the character but while Gilles Marini’s acting isn’t perfect, I have to admit that Luc is a decent bloke. He obviously loves Sarah (especially highlighted when they were discussing Robert’s condition) and he certainly seems to be able to deal with the Walkers as well. Maybe he really is the one for Sarah after all and the lack of angst so far with them is a godsend.

Because with Rebecca out of the picture, all the angst has been transferred to Kevin and Scotty. Two miscarriages off-screen and Kevin doesn’t want to open up? I can understand Scotty’s frustration and as much as it was nice that Kevin did decide to let Matteo (his juvenile delinquent client) stay with him and Scotty, I kinda wished he had been a little more sensitive with the lad as well.

When it comes to the whole parenting plot, I kind of wish that the writers would drop it now. Kevin and Scotty never seem to be on the same page when it comes to parenting and I have a fear that the more the writers pursue, the less we’ll get other storylines for them. Or am I just being a little oversensitive with this one?

Still as rocky as things are for Kevin and Scotty, at least they’ll pull through. Justin went against Rebecca’s wishes and re-enlisted and now she’s left him. I actually don’t blame Rebecca but at the same time, with Holly’s condition, was it really the best thing to do as well?

Holly having amnesia isn’t the best plot they could’ve given the character but it’s not the worst one either. I even felt more for David’s struggle with trying to help Holly than I have for anything else involving him but I get a slight laugh out of Holly’s renewed dislike for Nora once again. I wonder why that was. Still, it’s better than Saul, whose storyline about a boyfriend was largely off-screen. For the love of god, writers, give the man a meaty storyline this year. Ron Rifkin deserves it.

Also in “The Homecoming”

Opening and ending narrations for this episode. Last time that happened, it was back with “Glass Houses”.

Luc (re poster): “I can’t believe they really hung it.”
Sarah: “Oh, it’s hung. It’s gonna be a real ice-breaker at PTA meetings.”

I have to admit that I have a similar standpoint to Sarah when it comes to being on life support but I could also understand both Kitty and Luc’s perspectives as well.

Nora: “Because it makes no sense. It’s crazy, you can’t go to war.”
Justin: “This is war, this is war. Where I am, right now, mom and I’m not winning. I’m dying, I’m dying and over there, that feels like my chance to make things right again.”

Justin went back to the army a month after Robert’s death while Kevin seems to be doing pro-bono work in law.

Kevin: “I don’t have time to perfect my abs anymore.”
Sarah: “Anymore? Kevin, you never had abs.”

Saul: “I thought you lost your voice.”
Nora: “Not with you I haven’t.”

Nora’s working at a flower shop with a real bitchy boss named Zoe. I think it’s safe to assume that this won’t be a long lasting gig for Nora.

Kevin (to Scotty): “You have to let me do this my way, okay? I am trying to move on. Why do you think I’m doing this kind of work?”

Saul: “Where’s that Luc?”
Kevin: “Probably taking his clothes off.”
Sarah: “Kevin, that’s not funny. He will be here soon, something’s come up.”
Kevin: “Yeah, bet it has.”

Where was Tommy in this episode? Surely, he should’ve been here for Robert’s send off, right? Sally Field is now an executive producer on the series.

Justin (to his family): “I’m trying to help here. I mean it feels like after the accident you guys all went up to your room, shut the door and gave up.”

Kitty:”I always get to this point and I just can’t say it.”
Nora: “What?”
Kitty: “Goodbye. Goodbye Robert.”

Standout music: James Morrison’s “You Make It Real” at the end of the episode.

Kitty: “Like I said, it took a long time to get back here. I did the right thing, I know that now. I would’ve done it sooner if you were there to help me but you weren’t but I have this feeling I’m gonna be okay. I think we’re gonna be okay.”

Chronology: A year since “On The Road Again”

As an opening episode, “The Homecoming” certainly strained in parts and while there are certain things I didn’t like, I thought the acting in this one was incredible but the series does need to tread carefully with certain plotlines though.