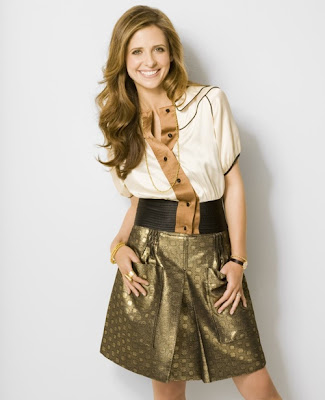 It's been a while since the lovely Sarah Michelle Gellar's been on our TV screens. Eight years since the end of Buffy The Vampire Slayer, the actress has starred in some hit and miss movies, had a baby and nearly a series on HBO (The Wonderful Maladys), which sadly didn't make it to the airwaves but now CBS have her in a dual starring role in a series called Ringer by Peter Traugott.

The series sees Gellar playing the role of Bridget, a woman who goes on the run from the mob and assumes her twin sister, Siobhan's identity, only to learn that Siobhan too has a hit on her from the mob (what did both these girls do to piss off the mob?). In further details released, it also seems that Siobhan ends up being killed in a boating accident and Bridget (whilst posing as her sister) has to uncover the circumstances behind Siobhan's death as well.

Traugott has maintained in recent interviews that the Bridget/Siobhan are somewhat different to Gellar's most famous TV role (I should hope so) but that there's an edge to the character as well. As premises go, this one definitely has a lot of potential and it would be nice to finally have Sarah Michelle Gellar back on our TV screens. God knows she's been absent long enough.

What does everyone else think of this?
Posted by shawnlunn2002 at 6:16 AM