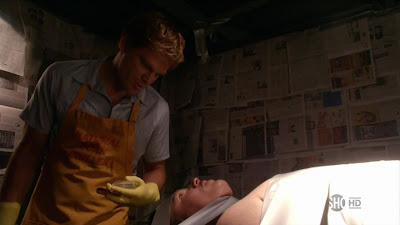 Boyd: “I did them a favour. They were all suffering and I put them out of their misery.”
Dexter: “You’ll be doing one more favour tonight.”

Oh, Boyd, if you knew that Dexter was a hot mess from the moment you met him, then why the hell did you not take any precautions with the guy? Oh well, after two episodes, Boyd’s journey came to the best ending ever – him on a table, killed by Dexter. Too bad that this kill didn’t go off without a hitch.

First off all for Dexter was his attempts to do the deed when luring Boyd into collecting a dead alligator. Dexter’s had his moments of sloppiness but getting hit by Boyd’s tranquiliser gun after knocking Boyd out was actually pretty comical but on a serious note, it was also bad for Dexter.

Boyd might not have gotten the opportunity to have gained a further upper hand but Dexter being in hospital, no matter how brief could be a problem down the line when Quinn continues to investigate everyone’s favourite serial killer. Well, that and the fact that Boyd is now dead could be another thing for Quinn to link to Dexter as well.

It’s almost a shame that Boyd did die in this episode because even though he was a nutter, I actually thought Shawn Hatosy was a lot of fun in this episode. Boyd had a pretty interesting way at looking at certain things and he was astute enough to piece that Dexter had been married as well.

Also his last few words were interesting. Before being finally killed, he told Dexter that the women whom he dumped in barrels of formaldehyde were having their misery ended. Boyd saw himself as a mercy killer and Dexter was snarky enough to use a similar phrasing when he ended Boyd’s life.

However with Boyd out of the way, it does seem like a set of new arcs have been opened up. Jordan Chase and his self-help tapes seem to be something a lot deeper than just something that helped Boyd work through issues and if death was a mercy, then what exactly were the poor women being subjected to that Boyd saw himself as a saviour of sorts to them?

Of course, the real meat of this episode wasn’t Dexter killing Boyd and being unable to feel good about it (I’m sure Dexter will get his killer groove back later in the season) but it was the young woman who was Boyd’s next victim. The same woman who looked badly beaten and witnessed Dexter murdering her captor as well.

I knew Julia Stiles was appearing in this series and I’ve always liked her as an actress but her first appearance here only sets up some question. We don’t know her character’s name, she doesn’t have any dialogue and aside from learning that she’s one of Boyd’s prisoners/victims, there’s nothing else we do know about her. That being said, I can’t wait to find out. Dexter had better not kill her.

And if the murder quotient wasn’t enough with Boyd, there’s also the Santa Muerte stuff as well to deal with. I am enjoying the pairing between Deb and Officer Manzon in trying to figure out why no-one wanted to talk about the deaths but I knew that as soon as that shopkeeper opened up a little, that he was a dead man walking. Sadly, I was right as well.

Even though the Santa Muerte stuff isn’t going to be a big arc this season, it’s certainly an interesting one. Particularly given the ways in which Deb, Manzon, Quinn and Angel all looked at the husband/wife killings and the neighbourhood’s reticence to speak at different angles. And I also laughed a little with some of Masuka’s inappropriate humour as well when the shopkeeper’s body was found.

Less of a laugh riot though was the Angel and Maria. I’m not really sure why some fans hate this pairing so much because I continue to root for them as a couple myself, especially after this episode. I want them to last as a partnership and even though Angel’s bar fight ended up doing damage to Officer Lopez, I’m not sure if he will end up in jail for it. I can easily see this causing further tension between him and Maria and maybe a suspension but definitely not jail.

In other plots, Quinn continues to have his weird moments. Counting the days since he last shagged Deb made him look like a desperate loser but I am finding it interesting how he’s managed to crack the connection between Kyle Butler and Dexter with ease. Looks like mystery girl isn’t the only problem that Dexter will have on his hands soon.

I loved the opening sequence with Deb interrogating prospective nannies before Dexter settled on Irish one, Sonya. Maria Doyle Kennedy is excellent casting.

Girl: “I’m totally clean.”
Deb: “Then why are you so nervous?”
Girl: “Because I wasn’t expecting on getting these kind of questions. I mean, you sound like a cop.”

Sonya sang “Bye, Bye Bunting, Daddy’s Gone A Hunting” to Harrison. If only she knew. And cheesy as it sounded, but I thought the Prince Harry nickname she gave the child was sweet.

Masuka: “True warriors are humble men.”
Quinn: “Oh please, you got a reason to be humble. You got fucked up running the other way.”

Deb: “You’re counting?”
Quinn: “I can’t help it. I have an internal clock.”
Deb: “Well, unplug it.”
Quinn: “I’m just saying at this point we might as well be married.”
Deb: “Shit on my face. You ever use words like ‘we’ and ‘married’ in the same fucking sentence again ...”

I don’t want to comment on it too much but thanks to other forums, I have realised that Desmond Harrington does look a bit gaunt this season.

Harry: “That’s the problem.”
Dexter: “What?”
Harry: “This kill won’t just make everything right. It won’t bring Rita back.”

Dexter (re routine talk): “Where did you hear that?”
Deb: “I am capable of independent thought, Dexter. Oprah.”

Dexter (to paramedic): “Crazy asshole, you were supposed to shoot the gator.”
Boyd: “You got in my way, fucking numbskull.”

Masuka: “Another head? And I was in such a good mood.”

Chronology: It’s been nine days since “My Bad” and we also learned that Harrison is 10 months old, thanks the child psychologist.

I really enjoyed this one. “Practically Perfect” certainly had moments of humour that cracked me up big time but it’s also given us an arc for Dexter outside of his own personal trauma and the next couple of weeks now look even more exciting as a result.