And we're back to an episode that while not progressing things a huge amount still had plenty of moments to pique interest though. 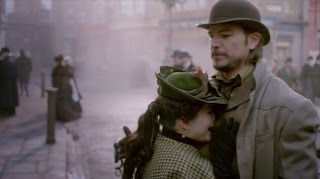 Sensible Shoes: Now I'm enjoying the witches as villains (and something about them reminds me of Roald Dahl's The Witches) but in this episode alone, aside from an attack at the house where some of Vanessa's hair was stolen, nothing has actually progressed with them. Hecate tried and failed to seduce Ethan (who thought she was working for his father) and Evelyn seemed to do nothing other than scowl at her daughter's failure as well. However as this episode also showed, Ethan should be less concerned about his father and more worried about that detective that's getting closer towards him. 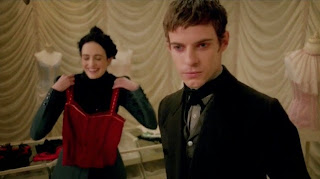 Not My Colour: A couple of little things I enjoyed in this episode. One was learning that Vanessa eats dessert for breakfast (thanks for that tidbit, Sembene), another was learning that Malcolm might need glasses (and like Ethan, he didn't seem adverse to Lyle lightly flirting with him) but a surprising highlight of this episode was watching Vanessa and Victor do a spot of clothes shopping for Lily/Brona (she'll always be Brona to me). It was a delightful little scene which showed that Eva Green is great with the comic moments along with the serious intensity this show throws at her as well. Anyways, onto the Lily bit of the week ... 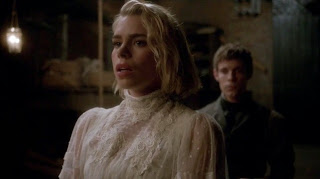 The Woman In White: Okay, I'm not crazy about Brona/Lily's new look and I'm still not sure I like where this whole storyline with her and Victor is actually going either. On one hand, I do like that Victor isn't trying to force Lily into doing anything she doesn't want to do but the plot still feels very skeevy and it's only a matter of time before Ethan finds out what actually happened to Brona and I can't see that ending well for anyone really. As for Caliban - I'm actually enjoying his slow burning connection with Lavinia more than expected. 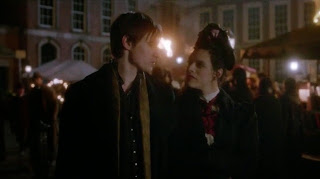 A Night Out: Still divorced from any of the main plots, I will admit that as a side story, Dorian's romance with transgendered working girl, Angelique is still a rather lovely subplot. Not only is it showing a kinder side to Dorian (though this version has never been edgy) but I'm really enjoying Angelique in her own right as a character too. This show's fluidity with it's characters sexuality is handled with subtlety but once again, I am hoping that Dorian does become more involved in the central plots fairly soon though. 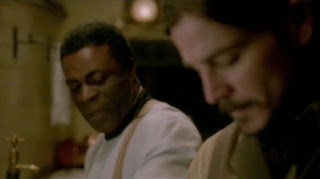 Unexpected Words: Another fun side moment in this episode was having both Ethan and Sembene sort of competing (but not really competing) as to whom could 'protect' Vanessa but at the same time also enjoying each other's company at the same time. We still haven't learned a great deal about Sembene and I'm worried we might not either. Other than that, I did enjoy this episode but having come after the brilliant origin story from last week, it's probably the weakest one we've had to date.

Next week Evelyn sinks her claws in a little further into Malcolm while Victor and Caliban come to blows.
Posted by shawnlunn2002 at 5:25 AM