After being somewhat underwhelmed by the trailer for Batman V. Superman: Dawn Of Justice released last month (not completely writing the movie off though), my excited piqued a bit more for the upcoming Suicide Squad movie thanks to a slew of leaks. If you're a spoiler phobe, don't read further on. You have been warned. 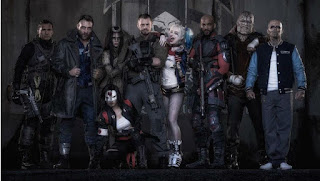 First of all, we got this rather mean and moody cast shot with the Squad all present and accounted. Rounding off the Squad, banded together by Amanda Waller (How To Get Away With Murder's Viola Davis) are Will Smith as Floyd Lawton/Deadshot, Margot Robbie as Dr Harleen Quinzel/Harley Quinn, Adewale Akinnuoye-Agbaje as Waylon Jones / Killer Croc, Cara Delevingne as June Moone / Enchantress, Jai Courtney as George "Digger" Harkness / Captain Boomerang, Joel Kinnaman as Rick Flag, Karen Fukuhara as Tatsu Yamashiro / Katana, Jay Hernandez as Chato Santana / El Diablo and Adam Beach as Christopher Weiss / Slipknot. Other confirmed cast members include Jim Parrack, Scott Eastwood, Raymond Olubowale and Common in yet to be revealed roles. 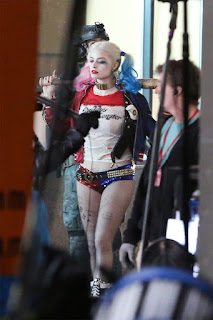 Then there's Harley Quinn herself. This is the first time for everyone that we're getting to see the character properly in a movie (Assault On Arkham aside) and I have to admit, I was apprehensive on how they would depict her. Casting wise, I think Margot Robbie is a perfect choice but given how naff some of Harley's later looks have been, the general look that Suicide Squad have given her is actually a pretty perfect modern take for the character. The pink and blue highlights in the blonde hair, the white face make up, the baseball bat, the tattoos and clever use of diamonds. I'd even go as far as to say it's the best version of the character since The Animated Series and should bode well enough for the movie too. 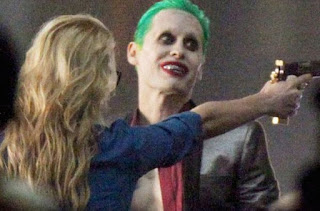 As for the relationship aspect - let's be honest, the biggest draw of the Suicide Squad movie is going to be the onscreen depiction between Robbie's Harley Quinn and Jared Leto's Joker and going by the filming pictures that have leaked, it seems like the movie won't be glossing over the dark and toxic relationship the pair of them have. Personally I'm glad because fascinating as the Joker and Harley are as a pairing, a part of me did fear that the movie might have downplayed that aspect in order to sate a certain contingent of the movie goers for this movie. While I'm still not too sold on Leto just yet, I do like how terrifying he looks as the Clown Prince of crime though. 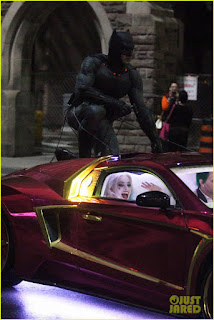 Meanwhile more recent set pictures and videos have also confirmed that Ben Affleck's Batman will also be appearing in the movie as one scene has him chasing down both the Joker and Harley Quinn. On a side note - how cool does Joker's car look? As for Affleck's Batman appearing in the movie - I'm actually glad he's factoring into it. I think it's a wise move to be honest but I imagine that Batman's role in this movie might be an even smaller one than his role was in Assault On Arkham was though. Either way, I'm definitely getting more excited for Suicide Squad at the moment.

Suicide Squad continues to film and will be released in cinemas from August 5th 2016.
Posted by shawnlunn2002 at 5:34 AM