Um, you know that scene in Carrie? Well, this episode did it's own version of that, among other interesting things this week. 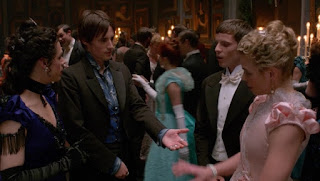 Dancing Nights: The main action this week in a case of shock/horror actually involved Dorian as he decided to have a 'coming out' ball for both him and Angelique and with the exclusions of Ethan, Sembene and Caliban, it was an opportunity for most of the main characters to be in the same room as each other and interact. However, it also seemed to trigger jealousy within Victor, a sense of Deja vu in Lily, bits of isolation with Angelique as Dorian seemed curious by Dr Frankenstein's cousin. At one point even Vanessa started to show some suspicions over Victor and Lily's relationship. Just wait until Ethan and Lily clap eyes on each other. Then Victor really will be screwed. 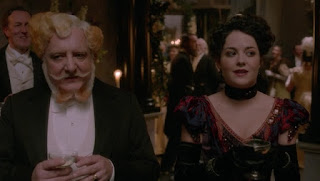 Party Tricks: I was fairly indifferent towards Hecate at the start of this season and while I probably won't be upset when she meets an inevitably horrible demise, I am enjoying her slightly subtle undermining of her mother's general scheming as well. Her scenes with Lyle in this episode were amusing and the frenzied and rather public attack on Vanessa was certainly daring and inspired by Carrie as well (I know this would precede that movie/book etc, era wise) for good measure. Surely, Evelyn should be picking up on the fact that her daughter might be her biggest threat right about now? 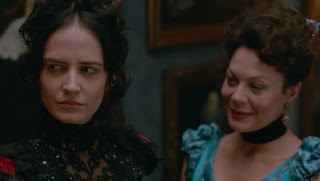 Scorpion Meets Witch: Finally Vanessa and Evelyn properly met again and their previous meeting (the seance, not at the moors) is referenced by both women on screen. More to the point, there's some deliciously cutting barbs between Eva Green and Helen McCrory as Vanessa openly challenged Evelyn's relationship with the increasingly spellbound/besotted Malcolm. It kind of finally feels like the show is moving a bit forward with this witches vs. Vanessa storyline, which can only be a good thing. 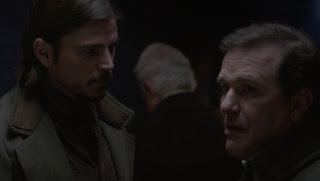 Wolfing Out: Keeping with the moving forward bit, one of the men who was after Ethan last season and survived decided to pay him a house call and threaten to scalp everyone if Ethan didn't come back with him to America. Then there was Detective Rusk continuing to piece Ethan's connection to that massacre as well. On the plus side for Ethan, at least he was able to get Sembene help him be contained when he wolfed out at the end of the episode. Now all he needs to do is tell the rest of the gang who he really is. 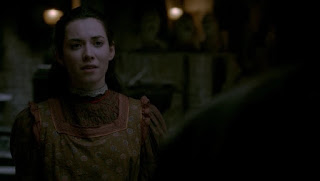 Uh-Oh For Caliban: And here I was hoping that he was going to have a genuine connection with Lavinia. In this episode, that was turned on it's head when she felt that his hands were cold and came to the conclusion that he might be dead (Dorian noticed that with Lily too). The fact that she told her parents about it cannot bode well for Caliban. I know he can be annoying at times (usually during any scene with Victor) but even I don't want him to hurt by his new employers though.

Next week, both Vanessa and Ethan return to the moors.
Posted by shawnlunn2002 at 5:52 AM