Now, this was more like it. After a slew of fairly disappointing episodes, the latest batch I've watched contained some of the more stronger and downright imaginative episodes to boot. 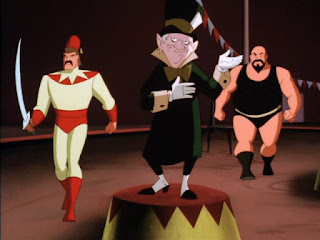 It's been a while since we've had both an episode delving into Dick Grayson's former circus stomping ground and the Mad Hatter and this episode gave us both and did it pretty well. Okay, anyone expecting another Robin's Reckoning might be a bit disappointed but it's still a good one with the focus on Batman and Nightwing (Robin is a little sidelined here) working against Tetch who has decided to use the animal and workers of Haly's circus for his own schemes, until a particular animal is then used to finally thwart him. A fun episode. 7/10 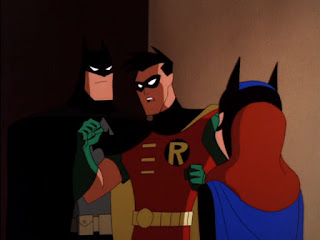 One of the more tense episodes we've had. One of the noticeable things about The New Batman Adventures has been the strained relationship between Bruce and Dick and I liked that this episode actually had Nightwing tell the new Robin exactly what went down here. I do like that Batgirl found out Batman and Robin's identities and vice versa and Joker was used pretty well in the story but Batman was a massive dick in the flashbacks but the episode's attempts of showing how Dick had grown out of being the sidekick was done extremely well though and I did love the final shot here too. 8/10

Episode 19: Legends Of The Dark Knight 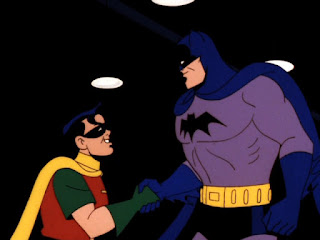 Oh wow, I just really loved this one. If ever there was an episode so delightfully meta and pithy, it was this little gem as three kids - Matt, Joel and Carrie all told their own versions of who Batman truly is and the results were just delightful. The use of 50s style Batman and Robin fighting the Joker was a beautiful nod to a certain series while Joel's comments about Batman's attire harkened to the likes of Schumacher's movies while Carrie imagined that she was actually Robin and there was also a decent use of a Mutant leader and Firefly as well. Easily the best episode after Holiday Knights for me. 9/10 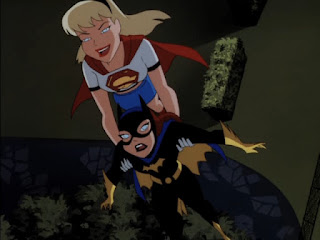 Anyone call for a sort of but not really sequel of sorts to Harley & Ivy? Well, even if you didn't, we got one anyways. With Batman relegated to a cameo, Robin/Nightwing nowhere to be seen and Superman also a no show, it was up to Batgirl and Supergirl to save Gotham from a chaotic courtesy of Poison Ivy, Harley Quinn and the slightly annoying but sparky, Livewire. It's a fun episode, filled with female solidarity and I seriously could do with more episodes with Batgirl and Supergirl teaming up and fighting crime. 8/10

Next blog will cover Chemistry, Judgment Day, Beware the Creeper and Mad Love.
Posted by shawnlunn2002 at 6:27 AM