My Review of Constantine's 1x03: "The Devil's Vinyl" 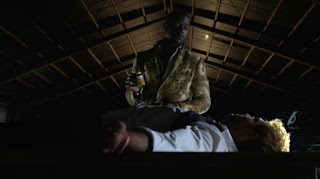 Constantine (to Papa Midnite): "All this to get me alone. I'm flattered. You're gonna have to respect my boundaries. I don't do zipties without a safe word."

It only took them three episodes but the introduction of Papa Midnite certainly turned out to be the highlight in a very music themed episode. The character is one of the biggest in the Constantine lore and his introduction here set him up as a rather interesting antagonist for John, who was happy to bleed the latter out a little while at the same time focusing on getting the Acetate.

I have to admit the main plot (despite my love of music) didn't really grip me as much as I was hoping it would do. Yeah, there was the nice trope of people selling their souls to the Devil for success or the survival of a spouse (with the main guest character this week) but it was only when Midnite made his entrance did it feel like the story actually went somewhere.

The back and forth between Constantine and Midnite is something that I really am hoping later episodes are going to go to town with as the fight between the two of them over the Acetate at the radio station did set up some potentially great future conflict. Then there was that final scene where Midnite decided to embark on a little voodoo against Constantine as well.

As for the rest of the episode - Chas had a little more than he did in the previous one but there was more focus on Zed, who more or less became a fully fledged member of John's crew and proved to be pretty resourceful throughout the episode as well. While a part of me would've liked Liv to have stayed on, I do think generally that Zed is a decent character though.

- Naked and bloody, that's an interesting way of seeing the lead character this week. Took me a minute to realise he was doing a spell though.
- Manny briefly popped up but seemed perfectly fine with leaving Constantine tied up and bleeding out.
- We also got some insight into John's musical past as well this week. We'll probably get more in a later episode.
- For a moment, I thought Jasmine's husband was actually Ritchie from the first episode.

Not my favourite one so far but the introduction of Papa Midnite in this one was satisfying though. "The Devil's Vinyl" did have a lot of fun with a favourite trope and there was still some lovely visuals (Zed seeing Jasmine and a white tiger for instance) to keep things interesting.