Recap/Review: How To Get Away With Murder's 2x01: It's Time To Move On

And it's back. In a week (or fortnight) of returning shows, How To Get Away With Murder came back and it was one hell of a blistering opening episode. One mystery was quickly wrapped up and another more shocking one ended the episode in style. 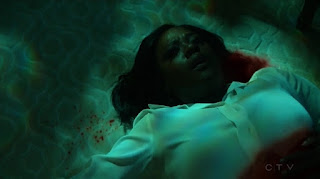 Who Shot Annalise: Well, we did see Wes running from the scene of the main cases house while Annalise was on the ground in a pool of her own blood. Now, first of all, I'm going to assume two obvious things - one, Wes didn't shoot Annalise and two, Annalise will inevitably survive. So, who did it then? Right now, I think it's either going to be Bonnie or new character Eve but it really probably could be anyone, right? Either way, it's set up a rather interesting new mystery as the one we thought would drive this season took an interesting turn. 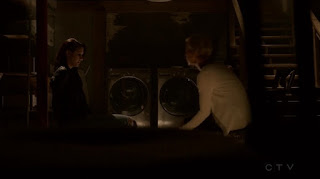 Not A Good Person: I really liked that the opening episode actually revealed Rebecca's killer and that it wasn't something we were going to have to wait until the mid season finale to happen. I also liked that some decent cases were made by Frank that either Wes or Laurel could've done the deed before Annalise figured it out and it was revealed that Bonnie did it. Bonnie's had something of an edge to her character and I did suspect that she would be Rebecca's killer, so I was pleased to be right on this one. I'm also hopeful in light of this information that we're going to learn more about Bonnie and the odd relationship relationship she has with Annalise. It's just as bizarre as the one Annalise herself has with Wes, isn't it? 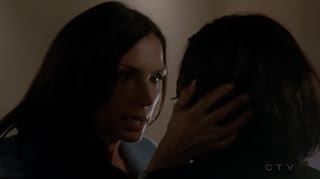 The Former Girlfriend: Keeping with the twists and turns of this episode, not only did we get a lawyer for Nate by the name of Eve Rothlow but it also turned out that Annalise and Eve used to be in a relationship together and going by the kiss they later shared, one that may be rekindled too. I have to admit, I am a little surprised to learn that Annalise is bisexual (isn't she?) but it was a nice twist handled really well but the wary part of me also wonders if Eve might be a future suspect in Annalise's shooting though. I hope not as it's a lame trope but I can't rule it out until now. I did like that Eve wised up to the fact that Annalise framed Nate for Sam's murder and called her out on it though. 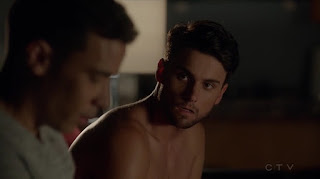 Domestics, Spying And Eggs 911: As for the Keating Five, they certainly kept things ticking along in this episode, didn't they? Asher was doing his best to avoid Bonnie so he could spy better on Annalise for that lawyer lady from last season's finale, Connor spent some scenes without clothing and committed to Oliver in many ways while Laurel and Michaela were sniping at each other as the latter contacted Eggs 911 and tried to pick up another gay guy at the bar. They were doing all this while Wes spent most of the time throwing a strop and realising that Annalise had lied about Rebecca's whereabouts - which actually might give him a motive to shoot her later on in the season, even though I still think it won't be him. 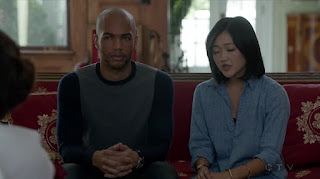 The Kids Might Have Done It: The main case, not just for this episode but it seems the first half of the season will be focusing on a pair of adopted siblings who might have killed their parents - at least that's what their aunt was convinced of. I did find it amusing how Annalise and company manipulated the situation so her firm could represent Catherine and Caleb and it was their parents home where Annalise was shot in, so there's definitely more than meets the eye with those two for sure.

Next week, there are some blindsights in the case of the siblings while Annalise is cross examined during Nate's preliminary hearing.
Posted by shawnlunn2002 at 5:48 AM