My Review of Constantine's 1x07: "Blessed Are The Damned" 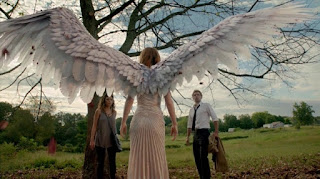 Imogen (to Constantine): "Guess you're on your own. Your angel did what they always do - nothing!"
Manny: "Like hell!"

Now this was a blast of an episode. Aside from Manny's presence, the show hasn't until delved too much into the angelic side of things but this one more than made up for it as Manny actually got to be more than a cryptic mouthpiece and we met a rather devilish fallen angel by the name of Imogen, who really did have everyone else fooled.

I liked that the episode took some unexpected twists with Zachary the preacher. Yes, he was pious and dismissive of anyone who challenged his faith and mistook Constantine for being evil but the fact he was manipulated by Imogen for her own ends (as well as being saved from going to hell) by having possession of one of her feathers, only for the real potential trouble to emerge when Zed gave it back to her - oh boy.

I've not been the biggest fan of Manny as a character but this was a great episode for him as we learned a bit more about the angels (missing feathers make them visible to everyone, they can be killed etc) courtesy of him having to actually work with Constantine and Zed this week and the actress playing Imogen is probably the best guest antagonist we've had so far. It almost makes me wish that somehow she had escaped but thems the breaks.

As for Zed - she really came alive in this one as well. I liked how integrated she was with both Zachary and Imogen and setting up the rather nice looking Eddie as a threat too from her art class was another good moment too. After a few shaky bumps, it seems like the show has finally found it's groove. If there was a negative to this episode, it did feel like Constantine was almost a little underused compared to previous ones.

- No Chas in this episode this week. Plus John and Zed were in Briarwood for this one.
- The walls between realities are getting thinner and thinner according to Manny. That's exciting from a story point of view.
- There was a serious lack of Constantine's trenchcoat in this episode as well.
- We're certainly due a big info dump on Zed's past that she seems desperate to avoid talking about pretty soon, aren't we?

An absolutely fantastic episode. "Blessed Are The Damned" definitely was one for angels both bad and less bad this week and certainly upped the stakes in such a nice way. Constantine might have had a little less than usual but a great episode for both Zed and Manny though.