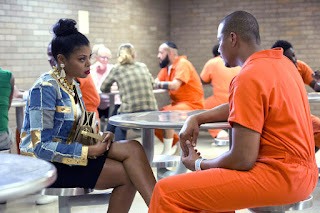 Lucious (to Cookie): "It's crazy how I can love your ass and hate you at the same moment."

And the biggest show on American television came back with something of a whopper. Anyone who might have felt that the show could potentially lose some of it's fizzle after the heights of the first season, should be relieved to know that this episode had plenty of it.

First of all, let's talk about the hostile takeover that didn't happen. I mean, let's give Cookie, Anika, Hakeem and Andre points for at least trying but they seriously underestimated both Lucious and even Mimi, who initially seemed like a bit of a soft touch. Cookie trying to pimp Anika into garnering Mimi's favour blew up in both ladies faces and a part of me was glad that even in prison Lucious was able to beat them.

It's not that I'm suddenly turning to the dark side (like Jamal kind of did here) but it's more that they were a little too underhanded in trying to take over Empire that it was nice to see them getting a little outsmarted here. While Jamal seemed a little too on his father's side nowadays, I don't think his anger towards the rest of his family was without merit though.

They did try to screw him over big time and the last scene where both him and Cookie fell out was sad to watch, but at the same time, there's blame on both sides too. As for the album rivalry with Jamal and Hakeem, that was something of a low point in the episode. I mean it was believable but it got tedious even before Becky herself was fed up of it too.

As for Lucious himself - prison hasn't turned out to be a deterrent for him. He was able to side up to Mimi (in spite of his continued homophobia) in order to prevent a hostile takeover and when Cookie's life was threatened, he paid enough inmates to kill off cannibal, Frank Gathers for good measure. I have to admit in that role, Chris Rock was pretty decent if a tad underused though.

I think the best guest star for this episode alone was probably Marisa Tomei's Mimi Whiteman and after Tiana, it's nice to see the show include some lesbian and bisexual women into the mix. That being said, I'm not sure I approve of Mimi's general gushing of Lucious though but I guess no-one is perfect.

Also in "The Devils Are Here"

Cannibalism aside, we also had Cookie in a gorilla costume/in a cage during the Free Lucious concert segment of the episode.

Mimi: "Lucious is the reason why we're here."
Cookie: "I hope it's not the only reason you have, Mimi."

Michael came back in this episode and seems to be sort of back together with Jamal. He's also helping out with LGBT fundraising too.

Becky (re Jamal/Hakeem): "You're rude, he's crude and the both of y'all are socially unacceptable."

Given the way Jamal kissed Michael in this episode, I've gotten a clearer picture of what those two get up to behind closed doors. I'm pleased Michael is back, even Ryan was referred to badly in this one.

Mimi: "Why do you want to depose Lucious?"
Cookie: "He's lost his way and I need to get my company back before he destroys it or destroys my family."

Michael: "Why you gotta be so nasty?"
Jamal: "Empire."

Jamal's album dropped to number 22, so some of Hakeem's bitchy comments were possibly on point.

Lucious (to everyone): "Game over, bitches."

Lucious (re Frank): "Kill him. Make it loud and make it long and by the way, I'm a sign your baby girl and slip her my bone."

Chronology: Three months since the events of "Who I Am".

It might have been six months since the first season ended but given the events of this particular episode, Empire certainly hasn't lost any of it's charm. The Devils Are Here certainly kept up the momentum of what came before and with Lucious probably not long for prison, it'll be interesting to see how much like him Jamal really will be as the new season progresses.