The Christmas special is done and dusted and here are some updates on it. 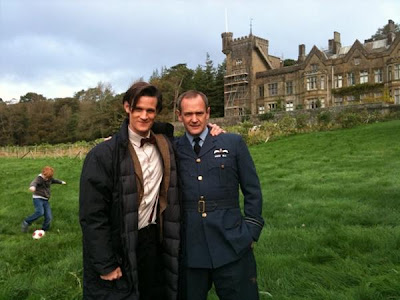 Alexander Armstrong tweeted this filming picture with him and Matt Smith and it's turned out that his character is an RAF Officer named Reg Arwell. So, presumably that means that Madge (Claire Skinner) isn't a widow after all. Both Bill Bailey and Arabella Weir's characters have been confirmed as Mysterious Harvesters A and B so far. Whether that means they're good or bad is unknown. 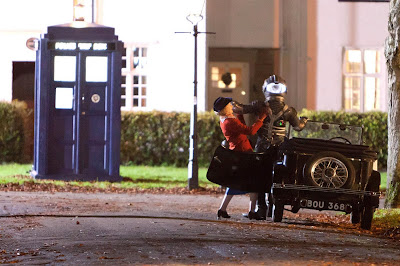 Another filming picture of the Doctor and Madge Arwell. The Doctor's wearing a space suit, including the helmet backwards. Before the Christmas special, there's also a new video game on the BBC site from late October called The Gunpowder Plot with the Doctor/Amy/Rory battling Sontarans/Rutans and meeting Guy Fawkes. Ralf Little and Emilia Fox are amongst the cast for it. 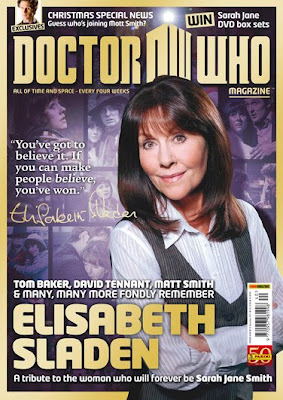 Meanwhile DWM have their tribute issue for actress Elisabeth Sladen ready for October 20th. The issue will interview the likes of Tom Baker, David Tennant, Matt Smith and many more on the late actress and this week coming is also the airing of the final story for The Sarah Jane Adventures called The Man Who Wasn't There. 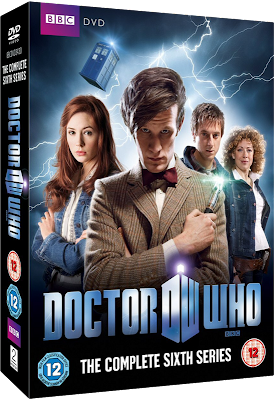 Last but not least, the complete sixth series of Doctor Who will be getting it's release on November 21st. There are supposed to be commentaries for the episodes The Impossible Astronaut, The Doctor's Wife, The Rebel Flesh, A Good Man Goes To War and The Wedding Of River Song as well as condensed versions of Confidentials, the prequels, the Comic Relief scenes, trailers, four Monster Files (Silence/Gangers/Antibodies/Cybermats), A Night's Tale and five new scenes as well.

The Christmas special airs on Christmas Day. Times have yet to be confirmed.
Posted by shawnlunn2002 at 6:29 AM