My Review of The Sarah Jane Adventures 5x03: "The Man Who Never Was" 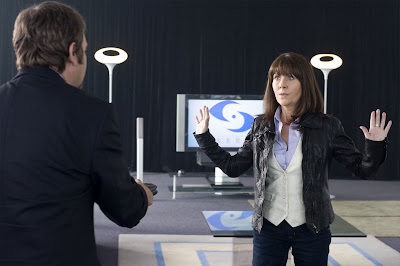 And so it is – the last ever story for this series. I’ve been looking forward to and dreading this story in equal measures, once again being reminded of the tragic passing of Elisabeth Sladen but also wondering and hoping that this story would be a good send off for the character of Sarah Jane Smith and the wonderful woman who played her.

You know what? I shouldn’t have worried because while this isn’t an epic finale, it’s a story that perfectly captured everything about the series and a story that does the opposite of what a series finale does. And unlike the recent season ender of Torchwood, the last scene will not have you wanting to bang your head against a wall in frustration.

Gareth Roberts comes up with a simple but so well executed storyline with plenty of nice surprises to keep the momentum going. In stories of the past, the Serf board/portable laptop that was about to go worldwide would’ve been an elaborate scheme to take over the world but here, they really are just laptops.

You have to admire the sheer cheek of Clyde and Rani initially wondering if Mr Smith has been affected by the portable laptop itself because he managed to put them both in their place but it was a fair question that needed addressing. Similarly the board’s creator Joseph Serf would’ve been the main villain of the piece, maybe even alien.

In this story, he’s merely a hologram for a far nastier piece of work and the real Joseph Serf’s whereabouts are actually unknown. If I was going down the theory mode, then a part of me would assume that Mr Harrison had disposed of him in some way but maybe he didn’t. Either way, we’ll never know what really happened to Joseph Serf but there were also more important bits to be getting on with, story wise.

Namely Sarah Jane and the gang stopping Mr Harrison, who didn’t so much want to take over the universe but had great pleasure in exploiting the alien aspect of it for his own good. I don’t want to use ‘saving the best for last’ but Harrison genuinely was a nasty piece of work when it came to villainous human characters on this show.

His complete and total callous treatment of the Skullions (whom he forced to maintain the presence of Joseph Serf’s existence via hologram) was more shocking than his utter willingness to kill Sarah Jane. I literally wanted to jump the air when he got his comeuppance but I get the impression that whatever punishment the Skullions subject to him on their home world, it won’t be anywhere near as terrible as the way he threatened their lives and abused their talents as a race.

With Harrison being the very worst of humanity in this story, it was nice to have Adriana stepping up as the best of it. Sure, the Skullions had no choice but to lock her up but I liked that she didn’t need Sarah Jane’s influence to have compassion towards them. I also found it rather interesting that Sarah Jane recommended her to go and see UNIT as a future career choice but it felt more natural than the last time the Doctor did it to be honest.

As for Luke and Sky, I have to praise the series for the realistic way in which it handled the transition. Luke went through the motions of feeling replaced by Sky and even being impatient with her before his ‘protective big brother’ instincts took over. Similarly, Sky did come across as the mischievous younger sibling before she also became more sensitive to Luke’s feelings. It’s too bad that we’re not going to see anymore of this.

Clyde and Rani – or Clani as Luke called them (since when was Luke into shipper names?) were also on fine form. They went from feeling a little excluded from the main adventure to being instrumental in taking down Harrison and even if they were faking it, they do make for a rather nice married couple, don’t they?

Of course the biggest highlight of this story wasn’t the mission of the week – it was the overwhelming sense of family. Over the course of five series we’ve had Sarah Jane, Kelsey (briefly), Maria, Luke, Mr Smith, K9, Alan, Chrissie, Rani, Haresh, Gita, the Brigadier, both the 10th and 11th Doctors, Jo, Santiago and Sky and it’s been a rewarding experience seeing the characters flourish.

Sarah Jane’s closing narrative about her life on Earth being an adventure and the joys of family might not be new for the series but it’s one repetition I will never have an issue with as a viewer. The closing montage of “And The Story Goes On Forever” was arguably the best coda this series could’ve ended with.

Also in “The Man Who Never Was”

This was actually the finale intended for Series 5. If circumstances had been different, there would’ve three other stories preceding it.

Joseph: “Do you want to see tomorrow today?”

Even though he will no longer be voicing Mr Smith, Alexander Armstrong has been confirmed as one of the guest stars for this year’s Doctor Who Christmas special.

Sarah Jane (to Luke/Sky/Clyde/Rani, re top journalist): “I mean me. What do you think pays for all of this, taking in washing?”

I got the impression that Lionel was being set up as a possible love interest for Sarah Jane had the series gone further and circumstances been different.

Sarah Jane: “I haven’t eaten any nuts.”
Harrison: “Well you might have been in a nutty environment.”

Rani (re Serf Board): “It needs a delicate touch.”
Clyde: “Well, I’m delicate. In a manly way. I’ve got artist fingers.”

Clyde and Rani posed as Janet and Trevor Sharpe for the Twilight Years magazine. Nothing to do with sparkly vampires for a change. Oh and I liked the mention of Ellie in this one as well.

Sky: “That’s my phone.”
Luke: “Welcome to the club. I’ve had seven phones in the last two years.”

Clyde: “The cavalry’s coming and it’s me and the missus.”

Doctor Who Magazine this month has a wonderful issue dedicated to Elisabeth Sladen, including a last ever interview, shortly before her death.

Sarah Jane: “I’ve seen amazing things out there in space but strange things can happen wherever you are. I know that life on Earth can be an adventure too. In all the universe, I never expected to find a family.”

Chronology: I’m uncertain as to when this is based in 2011 but Sky has definitely been with Sarah Jane for a while.

As a final story, “The Man Who Never Was” may seem a little small for a last dance for Sarah Jane Smith but as the ending says on screen, the story really does go on forever. It’s been an amazing five series and it’s a shame that it’s no more but as a final outing to both Elisabeth Sladen and her iconic companion; this is one fitting and beautiful tribute.