My Review of Doctor Who's "Death Is The Only Answer" 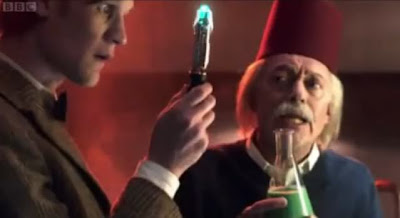 Einstein: “I made it, I’ll do the tests.”
The Doctor: “That’s the 20th century physicists for you. Always wanting to do it themselves.”

We’re really at a point now where we can’t seem to move for these special little scenes and following the end of Series 6, we now have another one written by school children. To me, this just goes to show how much this show’s popularity is not waning with the youngsters.

The scene itself is brief but fun. You’ve got Albert Einstein (Nikolas Grace) inside the TARDIS due to the connection with his fez – the very one the Doctor nicked from him and he’s come up with a formula for time travel. Except he didn’t because it just went and turned him into an Ood.

Of course, the effect didn’t last too long (the Doctor managed to reverse it rather snappily) and there’s more fun to be had with the friendly sniping between the Doctor and Einstein than focusing too heavily on the latter’s attempts of perfecting time travel. Still, though the Doctor should give Einstein back his fez already.

- This episode aired during the final episode of Doctor Who Confidential but it can be found on YouTube as well.
- Matt Smith actually wrote fanfiction with the Doctor/Einstein when preparing for playing the Doctor.
- Amy and Rory did not appear in this story but River was mentioned at the start of it.
- It’s hard to determine when the chronology for this is – perhaps after “Closing Time”? For Einstein, it was 1945.

A fun, lively little but I’m hoping that “Death Is The Only Answer” isn’t the only time this version of the Doctor meets Einstein. Surely, he should be a dead cert for Series 7, right?

He also met Einstein in "Time and the Rani", and took a picture with him and Father Christmas at Frank Sinatra's hunting lodge.

Thank you! Didn´t even know this one existed, so now I´ve got to go and check it out :)

I forgot that he wore the fez in "A Christmas Carol", so it's probably between "The Big Bang" and that.

Noybusiness - I did mention the 11th Doctor. I knew about Einstein encountering the 7th Doctor in Time And The Rani.
Guada GN - YouTube has the scene. Hope you enjoy.