My Review of Ringer's 1x03: "If You Ever Want A French Lesson" 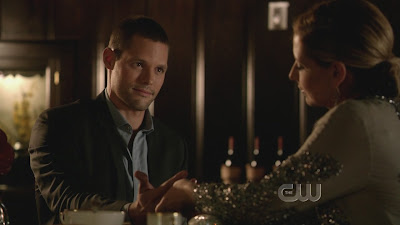 Siobhan (to Tyler): “It’s getting late. I have to leave but if you ever want a French lesson.”

After last week’s episode featuring too little of Siobhan, not much changed with this week’s one but for the two scenes we actually got with her, she felt more of a character in them this week for some reason. That was probably because for the first time, there was no Bridget connection to weigh her down for a change.

At a bar she met a handsome international banker named Tyler Barrett who she flirted with and nearly ended up having sex with until a wave of sickness seemed to stop her in her tracks. Is it wrong that I was disappointed that Siobhan didn’t actually go through with it? I mean, it’s not she’s shy when it comes to cheating after all.

Okay, cheating stuff aside, I did quite like Siobhan’s reaction to finding out that she was pregnant though. More interesting was the fact that she called Henry rather than Andrew, which seemed to indicate that Henry actually is the father or Siobhan actually loves him more than she does Andrew. Either scenario I could almost live with to be honest.

Siobhan loving and sleeping with Henry could also have contributed to the fact that we learned about her marriage to Andrew being on the rocks before faking her death. She certainly had no problem seeing divorce lawyers behind his back and she also had no problem with trying to find out how much a property of Andrew’s was worth as well.

However it was through Bridget that we had to find out all this stuff about with Andrew so the episode didn’t complete define Siobhan away from her sister after all. Bridget was the one who investigated the property and actually realised that Andrew wasn’t fobbing her off but only after she had managed to piss Andrew off as well.

At this point in the show, just about anyone could’ve put a hit out on Siobhan so Bridget suspecting Andrew being behind it because of a picture wasn’t that far fetched. However I do like the fact that Bridget had enough common sense to listen to Malcolm. He told her to get proof before assuming the worst of Andrew and Bridget was sensible enough to do so in that respect.

For the time being, it really does seem like whatever Andrew is keeping secret himself, he’s not responsible for the hit on Siobhan. I really do wonder what Siobhan did that anyone would want to kill her and I also have an obvious suspicious that Tyler knew exactly who she was at the bar and was only pretending to fall for her lies to him.

At least Bridget tried to get some answers by playing cat and mouse with the fella calling her attacker’s phone throughout the episode. It’s just a shame that apart from using Victor as a means of insurance that she didn’t wind up with any answers. Still, at least Bridget’s being somewhat smart in trying to find out about her sister’s murky problems whilst keeping a healthy distance from her own.

That being said though, I do wonder how much longer Bridget can keep up the pretence to Victor and everyone else about being Siobhan. At some point, people are going to have to start suspecting that she’s not her sister and I wouldn’t be surprised if Bodaway Macawi soon gets wind of where she really is too.

Speaking of Macawi – he’s a disappointing character in every respect. Yes, he might have kidnapped and tortured Malcolm and even drugged the poor guy but as a character, he is not delivering. Instead of feeling like a big threat to the series (and Bridget mainly), he’s just flat out annoying and wooden. He better improve over the course of the series because I’m having a hard time taking the character remotely seriously at this rate.

Even Olivia is a far more interesting antagonist and thanks to this episode, she lived up to the snake in the grass comparison that Gemma gave her last week. I knew she was going to put a spanner in the works with Henry’s attempts of pulling out of his investment with Martin-Charles and she certainly didn’t waste time in getting Gemma on board with Henry’s scheming. Again Bridget would want to watch her back with Olivia. I sense trouble ahead in the not too far future.

I’m not overly enamoured with Henry and Gemma’s problems because while I like the latter, I just haven’t warmed to the former at all. I did however like Gemma giving Bridget some sound advice in relation to Andrew though but I wonder if she would’ve been so eager to dole it out if she knew that Henry had been sleeping with her best mate.

Last but not least - Victor. Three episodes in and he does need some more depth as well as a character. This episode did seem to give some decent motives behind his desperation to put Macawi away though but I guess I want a bit more with the character. Though he did seem to enjoy telling Bridget everything he knew about Siobhan’s actions for the last while. Bridget better hope he doesn’t come into contact with Andrew any time soon then.

Also in “If You Ever Want A French Lesson”

Bridget’s faking morning sickness and Siobhan is actually getting night sickness. I think it was night time when she was throwing up.

Malcolm (re photo/Andrew): “That doesn’t exactly make him the killer.”
Bridget: “I know it’s a stretch but Siobhan killed herself for a reason. I know that she and Andrew were having problems. If he’s behind this, I kind of need to know.”

The matching pictures of Siobhan were during a holiday she had with Andrew and even Gemma had one on a postcard.

Bridget (re Andrew): “Why do you think he’s doing this?”
Gemma: “Who cares why? You’ve got to stop being so suspicious, Shiv and just enjoy.”

Olivia: “Do I need to remind you what’s at stake?”
Andrew: “Drop it. I’m not looking to make enemies.”

Nice gesture on Andrew’s part with the fashion and Swan Lake (which Gemma ended up going with Isobel) and Juliet’s off to see her mother for this week.

Andrew (to Bridget): “Why can’t you trust me, hmm? You used to tell me that I was the only man in your life you could trust. Now you’re sneaking behind my back, going to divorce attorneys. I was a fool thinking things were getting better between us.”

Malcolm (re Bridget): “She’s not a problem as long as she doesn’t come back.”
Macawi: “Exactly. I don’t like loose ends.”

Olivia seemed a little too interested in Gemma’s father during her conversations with Andrew. I assume we’ll be meeting him at some point then.

Hitman: “Come on, Siobhan, you don’t want two dead bodies. I already took care of the first one. Give me the damn phone.”

Bridget: “I don’t know where you’re getting at but I don’t like threats.”
Victor: “It’s not a threat, it’s a question. I’m not your enemy. I just want to know where Bridget is.”

Siobhan went by the alias of Cora Farrell in this episode. I guess she has some money left over because that hotel she’s staying in definitely looks expensive. The divorce lawyer was called Aubrey Zimmerman.

Bridget (to Andrew): “I realised that if we’re gonna move forward, I have to stop listening to other people and trust you. Do you think you can forgive me?”

Chronology: Pretty much from where “She’s Ruining Everything” seemed to have left off.

I liked this one better. “If You Ever Want a French Lesson” seemingly indicated progression within the show and while it’s not become the breakout show the CW have envisioned, it’s certainly more than done enough to secure a full first run. I’m definitely sticking with it.