My Review of Doctor Who's: "Meanwhile In The TARDIS Scene 1" 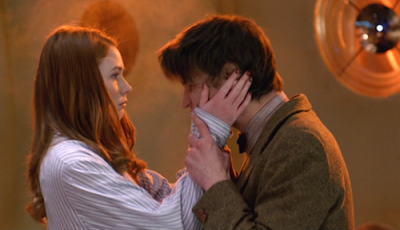 The Doctor (at the door): “Do you know what I keep in here?”
Amy: “What?”
The Doctor: “Absolutely everything.”

Ah, you gotta love the Season 5 DVD box set. While it shafted buyers out of deleted scenes and commentaries for every single episode, it did manage to give us at least two scenes never seen before with the Doctor and Amy in the TARDIS and both are a delight.

This first one here seems to be something of a culture shock for Amy. We saw her wonderment of being inside the TARDIS in the first episode of the season but this scene really had her babbling at a hundred miles an hour as she took in her new surroundings. Parts of it are staged like a sketch but amidst the babbling, there are some moments of practicality as well.

For instance, Amy asked the Doctor what kind of an alien he was and he only responded by telling her he was a nice one (while pointing out that she was alien from his perspective too) which doesn’t offer much in the way of a cohesive answer, does it? Still though, you have to be an Amy fan in order to enjoy this scene because if you’re not, it’s unlikely that this little moment alone is going to change your mind on her.

The best moment in the scene is definitely the last thirty seconds when Amy realised that there were in space and the Doctor chucked her out of the TARDIS. It’s a quicksilver moment where there’s poignancy behind Amy’s decision to leave on the night of her wedding and the sheer madness of the Doctor being blasé about his new friend’s curiosity as well.

- This scene is set between “The Eleventh Hour” and “The Beast Below”. Hence Amy still being in her nightie and the fact that she’ll end up being outside the TARDIS in space.
- I’m going to assume that the Doctor does in fact change the bulb on the top of his spaceship but nice of Amy to bring it up.
- The Doctor mentioned the TARDIS’s ability to blend into its surroundings upon arriving anywhere but he failed to tell Amy that he did at least once mend the chameleon circuit.
- Though it made a lot of sense in the context of what would follow, Amy doesn’t give any indication to the Doctor that she’s marrying Rory in the morning.

It was fast, fun and to be honest, if you love the Doctor/Amy dynamic, then all this scene is going to do is please you. If you’re not an Amy fan, then this little gem is unlikely to change your mind, I’m afraid but I sure as hell enjoyed it.