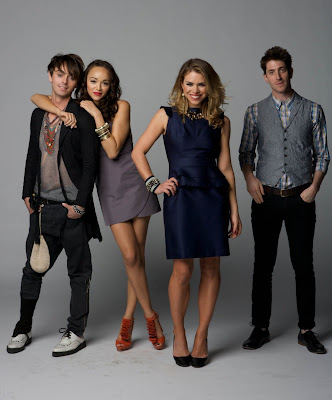 And with a month to go for the last season, here's a look into the series third year and while it's not my fave year, it's still pretty watchable stuff.

Episode 1: Belle the famous author. Love that Belle has bagged herself some fame that doesn't expose her identity but it's even more amusing to see Ben trying and failing to take advantage of it when he's mistaken for the author in question.

Episode 2: Ugh, it's the arrival of Jackie and while I often tease my own sisters, I'm certainly glad that I'm not related to this woman. Poor Belle having to deal with her and Ben shagging then. As for Duncan, I don't like the guy but I liked Byron from the off and there's good banter with him and Bambi.

Episode 3: It's well and good for Duncan to critique and her writing techniques but you can't help but wish that he'd pack it in and let her get on with it. At least the subplots with Bambi and Byron are fun to watch.

Episode 4: It's the food fetish episode and it's one that's incredibly weird for this show and one that's also quite compulsive viewing to watch in a strange way. On the plus side, Byron manages to win over Bambi and Ben/Jackie break up. Thank feck for that.

Episode 5: Not a bad episode but given I don't like Duncan all that much, I actually felt nothing when he was rabbiting on about how much he loved Belle, even if Bambi/Byron's engagement encouraged to give it a go.

Episode 6: Belle and Ben break off their friendship? Yikes. Not even a James Bond fantasy client can dampen the disappointment of that one.

Episode 7: I should've guessed that Duncan would've ended up visiting Bambi, the gee-bag. On the plus side, I did like seeing Belle getting the experience of being a client in order to write a chapter for her book.

Episode 8: Decent finale, more watchable for Belle finally ditching the dull Duncan and Bambi/Byron tying the knot. Oh and Belle and Ben made up as friends. Another plus to this season ender.

Probably my least favourite of the three series so far but it had it's moments and it was nice to have some new blood in the series, even if Duncan's exit couldn't have come a moment too soon.