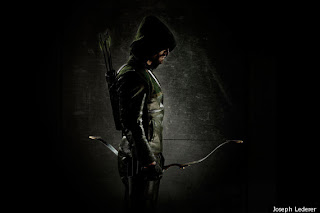 You got to hand it to the CW - they at least waited nearly a year after Smallville's end until deciding to go down the path of giving the Green Arrow his own show with Arrow and if the trailer is anything to go by, it looks like I'll be getting over my disappointment that Justin Hartley is not playing the role.

Instead it's Stephen Amell who's donning the role of rich playboy Oliver Queen and his more heroic alter ego, Green Arrow as the man returns to the city in a story that's more about the character's origins than we saw on Smallville. Katie Cassidy (Supernatural) will be playing Queen's love interest, Dinah Lance as well as Dresden Files actor Paul Blackthorne as a cop and with the rather gritty-ish feel to it, this definitely looks like it could be a sweeping success for the CW.