My Review of Deadlocked 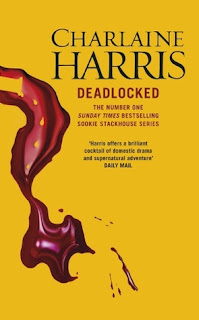 Written by Charlaine Harris
Released in 2012

Sam: “Sookie. You have to tell me what the cluviel dor is all about. How you made it work.”
Sookie: “Sure, Sam. Another day.”

I have to admit that the last few books have been a bit of letdown and while this one isn’t exactly as compulsive as earlier books have been, it does have a nice sense of resolving some ongoing plotlines that I think most can appreciate.

I’ve never been a Sookie/Eric shipper, so the dissolution of their relationship in this book is neither here nor there for me. I knew there would be consequences for the death of Eric’s maker and with the presence of King Felipe and Oklahoma Queen Freyda wanting to make a marriage with Eric; it seemed an interesting enough way of tearing the Viking and the telepathic waitress apart.

The book seemed to go to some lengths to actually point out that whatever love may be between Sookie and Eric, it’s obviously not enough for either of them to get the latter out of his arranged marriage with Freyda. Even Eric’s attempts to manipulate Sookie into using the cluviel dor don’t pan out for either of them.

Speaking of the cluviel dor, it’s not entirely amazing that its potency is only felt when Sam wound up being killed and Sookie had to bring him back to life. It might not be a popular opinion but I like the idea of Sam being the endgame for Sookie instead of Bill, Eric, Alcide or Quinn (who makes a brief appearance in this one). Over the last few books their relationship has deepened and become more believable, so it makes a lot of sense for Harris to actually go there with the characters.

In terms of the mystery, this one was an improvement as well. Kym Rowe’s death as part of the power games between Claude and Jannalyn meant that both of them got exactly what they deserved towards the end of this instalment as well and it served its other part in contributing to Sookie and Eric’s split and Sookie and Sam getting close to each other as well for good measure.

As for the return of Niall, I did feel this book could’ve explored that element a little more. While I enjoyed Sookie’s interaction with most of her fairy kin and Claude’s true intentions being revealed, it did seem a little rushed in resolving itself and I guess I’m going to miss Dermot as a character too.

- In terms of the mundane, Sookie became a third owner of Merlottes and turned 28, Tara had a boy and a girl (Robert and Sara), JB was a stripper at Hooligans and Jason/Michele got engaged.
- I’m hoping we get to see a bit more of detective Ambroselli in the next book. She was a decent enough foil for Sookie.
- Mr Cataliades helped Sookie dispose of the furniture shop owner that wanted the cluviel dor as well. Another death in the kitchen, folks.
- The next book will be this series last, according to Charlaine Harris.

“Deadlocked” was certainly a better read than the last two books but with the sense of winding down and the TV series itself becoming slightly less dependant on the books, it probably is time to call it a day. Still, this one is a decent read but not a classic.