Well, it's still filming on the Christmas special for Doctor Who right about now (in Bristol) and blimey, this episode looks like it's going to have the most gorgeous costumes seen on the show. 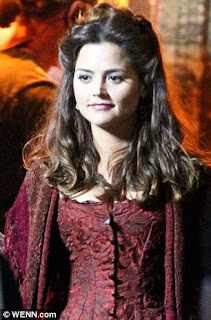 There's rumours in the papers that Jenna-Louise Coleman's character will be called Clara Oswin, a computer whizz sent back into 1890s London as a result of the Weeping Angels while she's holidaying in New York. It's also rumoured that one of her opening lines is 'rescue me boy and show me the stars', though whether any of that is actually true remains to be seen. However filming pictures for this episode (rumoured to be titled The Snowman) have shown Clara in both Victorian and contemporary clothing, so perhaps there is truth behind it. 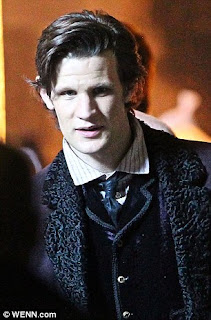 And it looks that Matt Smith's 11th Doctor is also getting into the dressing up mode as well. Seriously, I don't gush this much about costumes but this episode is seriously becoming the one from Series 7 I'm looking forward to the most. Richard E. Grant's character is rumoured to be an alien in this episode as well. Still nothing on Tom Ward's character, other than the rumours that Clara is living with him. 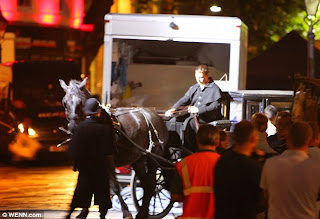 Meanwhile in some lighter rumours, apparently Clara will be giving the Doctor the nicknames of 'chins' and 'chinboy' (according to The Star). If that's not a hint that their relationship will remain strictly platonic, I'm not sure what is but either way, much as I will miss Amy and Rory, I am seriously looking forward to Clara's arrival on the show even more now. Meanwhile, expect some prequels to both Asylum Of The Daleks and The Angels Take Manhattan in the upcoming weeks.