And before I go into that, look at the image below for Series 7 of Doctor Who as well ... 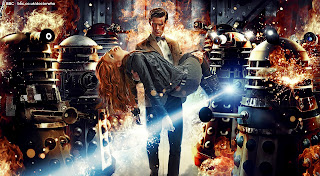 Steven Moffat wasn't joking when he said he wanted a movie style poster for every single episode. Apart from the obvious lack of Rory, this one for Asylum Of The Daleks is absolutely gorgeous with the Doctor and Amy. I can't wait to see what he's got in store for the rest of the episodes. 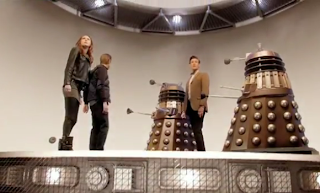 With the title of the opening episode being what it is, we are definitely going to be seeing a lot of Daleks. In fact, every single one of them and the scene where Rory asks who killed them all is gonna be a belter. I also loved seeing Amy say 'Geronimo' as well in that one. 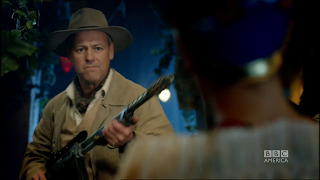 If you didn't guess the second episode was called Dinosaurs On A Spaceship, then the trailer makes it more blatantly obvious with the Doctor uttering the title as well as using one of them for transport as well in the trailer. Also, it is me or is there some serious flirting going on with Riddell and Nefertiti in this episode as well? Oh and Rory's dad, Brian (Mark Williams) is in this one too. 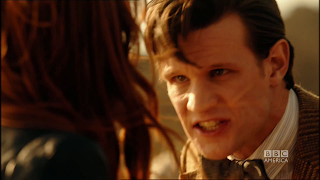 Okay, A Town Called Mercy got a little more interesting. I already knew there was a Dalek mention but mentioning the Master as well? I'm probably reading too much into that but it's rather cool and I love how Amy seems to be reminding the Doctor why travelling alone isn't good for him. The Cyborg still look a little generic but the mystery markings on the characters are intriguing me for this one. 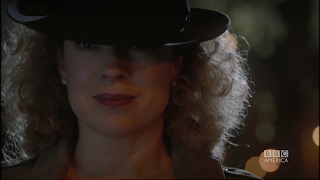 And hello River Song. She might not be the main focus this series compared to the previous one but River is still at least returning to the show for episode 5, the one set in New York with Weeping Angels and the departure of Amy and Rory. I'm both looking forward to and dreading that episode in equal measure now. 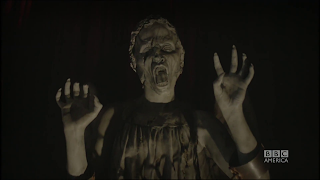 As the trailer for the first half of Series 7 suggests, it's going to be a turbulent time for the Doctor, Amy and Rory. Whether or not, the Ponds depart peacefully or not seems to be up in the air but either way, this 90 second gem of a trailer certainly has this viewer eagerly anticipating the new series all the more now.

I wonder why the Weeping Angel is wearing shackles.

I'm not sure but it does look rather interesting.