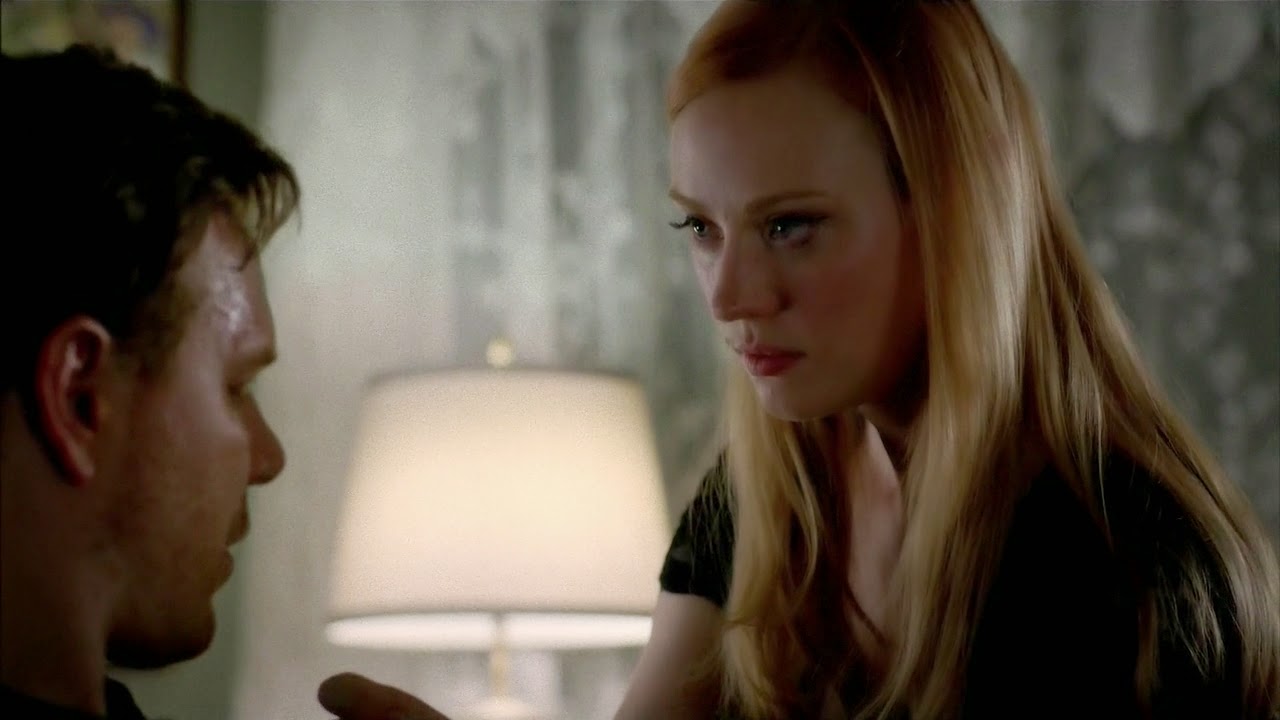 Bill (to Eric, re Sookie): “In the end, you have to admit it. It’s her light that pulls us in, just as much as she’s pulled towards our darkness.”

It might have taken Bill to the penultimate episode of the series but when it comes to the triangle between himself, Sookie and Eric, perhaps he’s finally right about something. If Bill indeed is no good for Sookie, then perhaps neither is Eric. However at the same time, both of them did in this episode try to demonstrate some genuine selflessness in relation to Sookie at long last.

Bill’s refusal to drink Sarah’s blood and cure himself might be frustrating but despite the fact that he’s about to make Jessica an orphan of sorts, perhaps being dead is the only way that Sookie can be free of him and his influence. I don’t know if either Bill or Eric will make it out of next week’s episode alive or if Sookie will end up with either or neither but at least this episode was something of an honest appraisal of this triangle for the last few seasons.

As for Eric, when he wasn’t having the briefest and funniest of sex scenes with Ginger – I have to admit, my respect for him actually soared in this episode. He gave both Bill and Sookie some rather sound advice while putting his own desires to one side. More to the point, he actually managed to get through to both Bill and Sookie as well. Here’s hoping for his sake, he’ll be able to get through to the Yakuza or better yet, just kill of Gus Jr and his tiresome cronies already.

As villains go, the Yakuza have become clichéd and boring and I’m hoping the finale doesn’t spend too much time on them either. This week, Gus Jr chose to torture Pam once again to get Eric to admit that Sookie was aware of Sarah being the cure. For once, I wasn’t that frustrated that Eric ratted out Sookie as I am hoping that it will lead to this New Blood plot being over and done with, once and for all.

Speaking of things being done – Sam and Nicole actually left town and left a few letters to explain the motives behind it. I liked the contrasts in the letters that both Sookie (heartfelt) and Andy (to the point) received. While I don’t think the show has done a great job with developing Sam and Nicole as a couple, I do think that perhaps Sam made the right choice by actually leaving Bon Temps.

Keeping with the relationships – I think it was a great gesture on Jessica’s part to give her own blessings towards James and Lafayette but her and Hoyt getting back together was laid on pretty thick though. I loved them as a couple during the second season but the way Jason explained it to Bridget made Jessica and Hoyt sound like the epic romance of the series instead of the whole Sookie/Bill/Eric thing.

Speaking of Jason – I’m proud that he actually didn’t sleep with Bridget and while their connection did feel a tad rushed, I will admit that after she got over her frustration with Hoyt and Jessica that Bridget was actually pretty enjoyable in this episode. It does though seem a little neatly wrapped up though – Jessica/Hoyt and Jason/Bridget but I guess there are bigger issues to deal with in the finale, so I won’t complain about it too much.

Also in “Love Is To Die”

Willa briefly appeared in this episode during Arlene’s get together at Bellefleur’s Bar & Grill. I also liked the brief telepathic exchange with Sookie and Adylin as well.

Sookie (to Bill, re Sarah): “If you don’t drink her blood, you’re making a choice. A choice you won’t have to live with but we will, Jessica and me.”

Pam showed a fragment of compassion for Sarah by dyeing the latter’s hair back to blonde. Sarah spent most of this episode bound and gagged and being threatened/insulted.

Pam (to Jessica): “Cry on my jacket and you’re paying for it, sweetheart.”

Sookie: “Who would’ve thought – Arlene Fowler dating a vampire?”
Arlene: “You don’t have to tell me how strange it sounds.”

I’ve really enjoyed the ‘advice’ side of Arlene this season. I hope she’s able to get business up and running successfully again.

Jason (to Bridget, re Hoyt/Jessica): “You just happened to pick a guy who had already met the girl he was supposed to be with.”

Sookie: “I’m scared.”
Eric: “Death is scary. I’ve been avoiding it for a thousand years.”

Eric: “She knows.”
Gus Jr: “Finally, some honesty. Where does Miss Stackhouse live?”

Chronology: From where “Almost Home” left off.

I really enjoyed this one. “Love Is To Die” certainly focused on some serious matters of the heart and while it was nice to see some emotional honesty – Sookie’s dynamics with Bill and Eric, Jason’s sexual prowess etc, I do hope that the last episode will give this show the true death is really deserves as well.