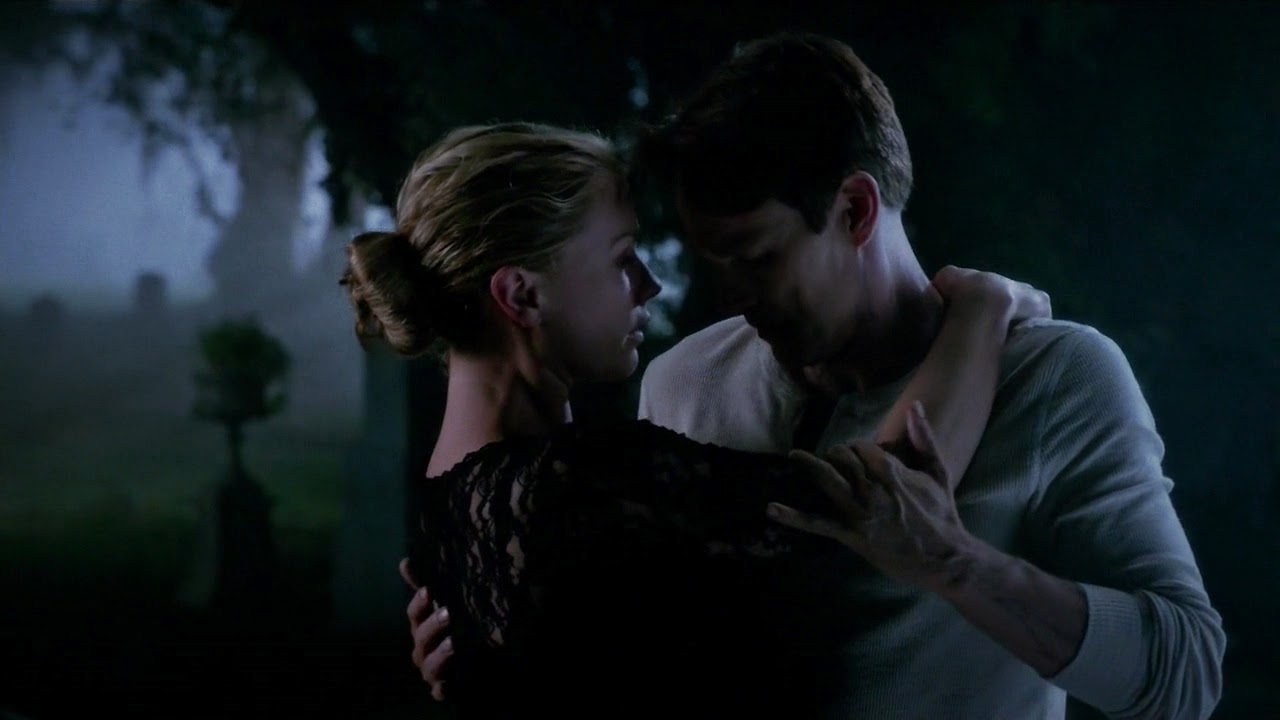 After seven seasons, I’m not sure I could let go of this madcap show either and that’s in spite of the fact that this season has largely been polarising in parts. As for a final episode, this felt more like a chipper version of Chosen than a more nihilistic version of Not Fade Away. If you get those references, you’ll know what I mean.

The main point of this finale was of course Sookie and finally putting a nail in the coffin to both her relationship with Bill and Eric. It seemed that last week’s interaction was the last time Sookie and Eric got any onscreen interaction, so it was really up to the episode to end things with Bill once and for all.

I did think it was a tad selfish of Bill to ask Sookie to use her light in order to kill and I’m glad that when it came down to it, she opted to stake him in his coffin in the cemetery instead of giving up the last bit of light she had left inside her. As for the scene itself, I think it hit the right note. Bill was ready to die and the last episode was in need of a major kill and his death had the impact that both Tara and Alcide’s should’ve done earlier in the season.

More to the point, the show took up the flash forward route in order to show us that Sookie married an unidentified man (we literally didn’t see his face) and was pregnant while Jason started a family with Bridget and Hoyt and Jessica tied the knot before Bill met the true death. If Sookie was going to marry someone, maybe it should've been Alcide instead of an unknown stranger though.

Speaking of Jessica and Hoyt – the wedding was rushed, a little cheesy with Andy’s ‘love is love’ speech but it was still a lovely moment in an episode where the latter and Jason managed to patch up their differences and move on but was it one step too sweet in a final episode low on big kills? Minus Bill of course.

However, let’s be reminded of the fact that not everyone got a happy ending here. Mr Gus Jr went up in a ball of flames thanks to Eric’s quickness with a gas canister and a light and the Yakuza themselves never got to pay Sookie that house call they intended to either. Of course, the only person who got a worse fate than them was Sarah Newlin herself.

She only got one single moment of her freedom back before being recaptured by Pam, having her blood synthesised into the internationally popular New Blood while being locked in the basement of Fangtasia going out of her mind, being fed off by rich vampires and haunted by Steve as well for good measure. If she wasn’t such a horrible person, I might actually feel sorry for Sarah but her own bigotry and stupidity sealed her fate in the end.

As for Eric and Pam, their outcome was pretty. I wouldn’t have minded if one of them had perished in this episode (is that controversial, opinion wise?) but I did like them getting rid of Gus and his irritating cronies and becoming billionaires with the New Blood while maintaining their hold on Fangtasia. As fates go, it was a nice one for the mischievous pair.

Also in “Thank You”

Nice cameo from Adele in this episode encouraging a younger Sookie to persevere. We also got to see a younger Tara but not Rutina Wesley though. At least Lafayette and James seem to be happy.

Bill: “You deserve everything. You deserve the world.”
Sookie: “What if I all want right now is to see you live?”

Bill legally left his house to Andy. Andy ended up letting Jessica and Hoyt continue to live there as well.

I had to laugh at Sarah’s horrible attempts of seducing Pam, only for the epic knock back she received from the latter.

Andy (to Jessica/Hoyt): “The love you two share is beautiful and love is love, plain and simple.”

Sookie could read Bill’s thoughts during the ceremony. For a moment, I actually did begin to think the writers were going to turn him human.

Standout music: Led Zeppelin’s “Thank You”, which was an interesting choice for a final song.

For a series finale, I’m not sure “Thank You” will go down as one of the best but at the same time, I’m not sure it deserves to be a maligned one either. This final season really could’ve been better thought out and executed as a collective whole (something I’ll write about in a later blog) but even though this episode was a little saccharine at times, I actually enjoyed it more than I probably should’ve done. A good ending overall.

I would love to read your thoughts on how Season 7 could have better executed as the end of True Blood. I honestly feel nothing more than disappointment and loathing for what was conceived. Eric and Pam were the only positive aspect of the season.

It'll be next week. I have to sit down and plan it out, but it'll entail certain things either not happening or happening quicker lol.

I haven't hated this season but at the same time, it should've been so much better than it was though.