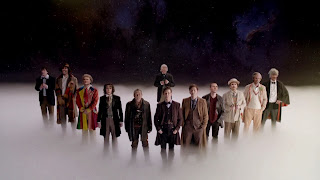 Tenth Doctor: “What we do today is not out of fear or hatred. It is done because there is no other way.”
Eleventh Doctor: “And it is done in the name of the many of lives we are failing to save.”

I know it’s been two days since this episode has actually aired, so I apologise for the delay in the review but I really felt I needed to watch this one a few more times before even attempting a review that could do justice to what I watched on Saturday evening.

Anniversary episodes are always going to be tricky to write and when they’re monumental ones like a fiftieth, they’re going to be even harder. Surely, this episode is going to be the most scrutinised and debated thing that Steven Moffat will have ever written in his career, right? The question though for me was whether or not the episode actually succeeded in what it set out to do and I’m going to say yes, it bloody well did.

The audacious idea of restoring Gallifrey and locking it in a frozen moment of time might have been met with some derision by the anti-Moffat brigade but it was actually a smart way of unburdening the series from the Time War plotline without invalidating a single thing Russell T. Davies did with the storyline in the first place. Ideally, it’s a best of both worlds type of situation and also gives us a future arc for the Twelfth Doctor as well.

I also thought that actually having thirteen Doctors be the ones to do it – the twelve we know and John Hurt’s War Doctor was a great way of doing it as well. I literally got a shock when I briefly saw Peter Capaldi on screen and it was a delightful moment in which to be a fan of the series as well.

Of course, while Capaldi made the briefest of appearances in the episode, it was the appearance of Tom Baker that really floored me. Was he really a kind Curator of the Under Gallery, an older Fourth Doctor or a future Doctor looking like one of the favourites? I absolutely think there’s an argument for all three scenarios but the sheer unbridled joy of seeing him and Matt Smith interacting on screen will go down as one of the most iconic moments in the show’s fifty year history.

As for the main plot itself – the Time War. We already saw in a prequel how the Eighth Doctor became the War Doctor and here we had him declaring war on both the Daleks and Time Lords alike by nicking the Moment – a device with a conscience, which lead to another thing too – Rose Tyler.

I know some fans weren’t exactly jumping for joy when the character was announced to be appearing in this episode but in all fairness, Moffat managed to use Rose without actually having her really there or invalidating her own personal history with Doctors Nine and Ten. While a part of me would’ve liked to have seen the real Rose, the Moment using her form and mainly interacting with the War Doctor was a satisfying compromise nonetheless.

As for the Doctors themselves – I had forgotten how much fun multi-Doctor interactions can actually be (and funny considering I watched two certain stories before this one last week). Matt Smith, David Tennant and John Hurt all played off each other brilliantly. We had the conflicts, the pithy nicknames (Matchstick Man, Chinny and Granddad), the angst of the Time War and the exuberance when they came up with a solution to change the outcome of the Time War. I can’t single any of them out because they all complimented each other so well.

Speaking of compliments, while this episode totally wasn’t UNIT at their best, I did like seeing Kate Stewart again and I do think her own companions/scientists Osgood and McGillop have the potential to be interesting recurring characters. As for Clara, she was also on fine form but in some ways, she did play a more supporting role but a very effective and affecting one as well in places, especially given her interactions with the Doctors.

If anything did however let the episode down a bit, it probably was the use of Elizabeth the 1st and the Zygons, both of whom had a plotline that could’ve easily worked in another episode. The Zygons kind of improved on repeating viewing but they were still overshadowed by the Daleks and Liz’s scenes were one too many at times, though I did like her at least taking one of the Zygons out. She gets points for that at the very least.

Also in “The Day Of The Doctor”

We got a brief glimpse of the title sequence from the first episode with a BBC logo and Clara is an English teacher at Coal Hill.

Eleventh Doctor (to Clara): “I’ve had many faces, many lives, I don’t admit to all of them. There’s one life I’ve tried very hard to forget.”

While we didn’t get any Classic companions in the episode, we saw pictures of many of them and at least Jack, the Brigadier and Ian were mentioned/alluded to onscreen.

Rose/The Moment (to War Doctor): “Look at you – stuck between a girl and a box. Story of your life, eh, Doctor?”

Elizabeth 1: “Tell me, Doctor, why should I waste my time on you? I have wars to plan.”
Tenth Doctor: “You have a picnic to eat.”

UNIT have a Black Archive that is both TARDIS proof and contained Jack’s Vortex Manipulator as well. Did Clara actually give that back?

I did like that Moffat had the good humour to actually poke some fun of his own use of timey wimey in the episode as well as the Doctor getting snogged a lot too. Also the use of 3D paintings/Time Lord art was pretty neat as well for the episode. Gallifrey Falls No More indeed.

Kate/Zygon (to Clara): “Dear me. I really do get into character, don’t I?”

This episode had many nods to the past but seeing the various TARDISes and the Doctors reaction to them was another priceless moment I felt.

War Doctor (re kissing): “Is there a lot of this in the future?”
Eleventh Doctor: “It does start to happen, yeah.”

If you enjoyed this multi-Doctor special, you might want to check our The Five Doctors Reboot on the BBC website. It’s bloody hilarious.

We got a brief trailer for the Christmas special and spoilers (including the official poster) have already leaked. Looks like Trenzalore is getting a revisit then.

Eleventh Doctor: “Is that what I’m supposed to do now? Go looking for Gallifrey?”
The Curator: “It’s entirely up to you, your choice.”

I wasn’t sure about this episode at first, but having watched it enough times now, I can honestly say that Steven Moffat did justice with “The Day Of The Doctor”. Whether it’s better or worse than previous anniversary episodes, I’m still not sure but it was fun, epic, emotional, brave and fan pleasing in every way possible. I think it could be possibly the best thing he’s ever written for the show.