My Review of Revenge's 3x07: "Resurgence" 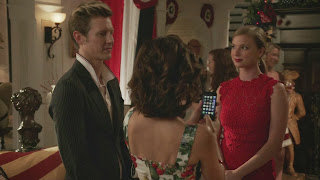 Emily: “It was fun being your wingman.”
Nolan: “I taught you well, grasshopper.”

Okay, this was an interesting role reversal. For once it was Nolan with the revenge mission and Emily helping him out and while I doubt the show is planning to change direction anytime soon, this was a lot of fun to watch.

So, who deserved Nolan’s wrath? Why it was only Ana Ortiz of course who decided to take a break from Devious Maids (anyone else watching that show? It can’t just be me, right?) to pop up in this episode as a PR guru named Bizzy Preston. It seems that Bizzy was bust outing Nolan in the past and sabotaging his relationship with his father in the process.

Usually Nolan is the one talking Emily out of getting even, so it wasn’t too much of a shock when Emily was more happy to assist than deter Nolan from his quest to get even on Bizzy but even after wrecking her business and pissing off her client list, Nolan still managed to show Bizzy enough compassion to not blab to her husband about an affair she was having.

I like seeing Nolan’s more ruthless streak and given the nature of what Bizzy did to him, I definitely think he was fair in taking her down and the episode did end with the potential for Bizzy to pop up again at some point as well. I’m sure with her PR skills and loose tongue; she can cause more chaos in the Hamptons at just the wrong moment.

Of course when Bizzy wasn’t having her career incinerated by Nolan, Emily was using her in some bizarre scheme about a first husband that Victoria was inevitably told about as well for good measure. I’m sure really sure Emily pretending (if she was) that she had been married before was a great idea but then again, neither were Victoria’s attempts of forcing a reunion with Emily and Aiden as well.

You know Victoria might be losing her touch when even Charlotte had to point out that the best chance of breaking up Daniel and Emily was to get Sara back in Daniel’s life. Charlotte already made sure Sara was working at the Stowaway and this episode had Sara becoming the cake lady for Daniel and Emily and made sure that Victoria tried to push Sara and Daniel together.

I’m not really sure why Charlotte and Victoria are even bothering anyways. Daniel managed to do a great job himself nearly kissing Sara during the fireworks at the Fourth Of July party but it didn’t stop Emily and Nolan getting wind of their near kiss as well. I’m always for Emily ensuring that the Graysons get their due but I do hope that Emily doesn’t destroy Sara in the mix though. Mainly because she’s actually nice enough and hasn’t deserved to be used as a pawn by everyone as well.

Last but not least Margaux got a little more interesting in this episode too. Personally, I’m not that bothered about her and Jack and their sex scene didn’t do much either but I do like the fact that Margaux seems to be keen in unearthing the real story behind Conrad. I doubt she’s going to succeed without being eventually bested by Conrad but at the same time, it’s amazing how a tiny plot point can suddenly improve a character too.

Why would Victoria admit to writing a letter to Patrick in front of Conrad? That just seemed really stupid on her part.

Jack (to Margaux): “Don’t let the Graysons take over your life.”

Emily: “I’m sorry, Nolan.”
Nolan: “Bizzy’s the one who should be sorry and we have to stop your becoming the victim of her next PR machine.”

Emily: “This can’t get out.”
Bizzy: “I’m a gravedigger, babe. I bury things bigger than this every day.”

I found the fact that Daniel wasn’t threatened by Aiden at the party amusing because it did seem like Emily was genuinely irritated by it.

Nolan (re Bizzy): “If it’s a surprise you want, I’m more than happy to oblige.”

Aiden got kicked out of Grayson manor this week but he did manage to help Emily with her frame up plan and got a goodbye kiss as well. I don’t think he’s going anywhere for too long though.

Daniel: “Hope you’re not hiding from my mother.”
Sara: “She doesn’t scare me anymore but man does she try.”

Aiden (to Emily): “At least I get to say goodbye this time.”

Nolan (re Daniel/Sara): “Looks like they were about to rekindle their past.”
Emily: “Then I have to make sure they have no future.”

Chronology: Fourth Of July for most of this episode.

I’m not sure why this episode was actually called “Resurgence” but overall I liked it and it was an amusing enough diversion. I do feel that we’re sort of treading water a tiny bit until the wedding episode but at least Nolan had some truly fab moments in this one.