My Review of Wizards Vs. Aliens 2x02: "Vice Versa" 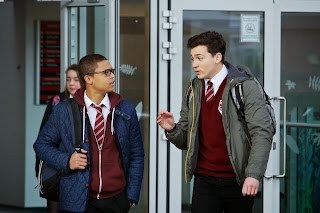 Squiggley: "They'll find their lives greatly changed, now Squiggley has had them rearranged."

I said in my previous review that the writing this series has improved and it continued nicely enough with this episode too as the 'trading places' trope was effectively used in giving Tom some smarts, Benny the magic and altering the personalities and abilities of Ursula and Varg as well.

The Tom and Benny stuff was pretty cliched but enjoyable. Both of them got to experience the other side of things with an appreciation of each other towards the end but I actually thought the Ursula and Varg swap was more interesting to watch.

Ursula herself became pretty hot tempered and cold while Varg spent a good portion of the story nearly being killed by his own sister before the eventual capture of the second Hobbledihoy, Stickley managed to change things back in the nick of time. Either way, I've noticed this series that Varg has taken more centre stage while Lexi has taken a backseat.

As for the Hobbledihoy part of the story - it was a mixed bag. Both Squggley and Stickley's use of couplet was amusing but also a little distracting at times too and I'm not sure if keeping the latter with Randall Moon is the best of ideas. Then again, the poor guy doesn't exactly get out much either.

- Jathro seems to be spying on the Nekross and informed someone about Lexi and Varg's feuding.
- What was the obsession with chickens in this story? Varg couldn't stop with bringing them forth when he had Ursula's magic.
- Quinn and Katie need a bit more to do and it was a little annoying that we didn't get any continuity on Chloe either.
- So does Benny actually fancy Katie because that flirting scene with them did seem a tad random?

Overall, while the couplets did grate a bit and the role reversals with Tom and Benny were hardly original, I do think "Vice Versa" was actually a lot of fun to watch.