My Review of Wizards Vs. Aliens 2x05: "The Thirteenth Floor" 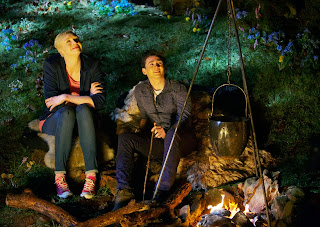 Had things been different, The Thirteenth Floor would've been a story that audiences would've seen in The Sarah Jane Adventures but instead, it's a story that has now emerged on this show and quite the story it turned out to be. If ever there was a turning point for this show, then it certainly had to be during this one.

The Neverside/way/whatever it's been called has been mentioned so many times this series, I thought we were going to have to wait until the last story of the series to actually see it. Instead a meddling gatekeeper by the name of Mervyn kept tricking people into entering Floor 13 in the Psyke Games building and for Tom, Lexi and Varg, it turned out to be one hell of an experience.

I always suspected there was a bit of an attraction between Tom and Lexi and when the latter's latent desire to be human meant that she became one during her stay in the Neverway, it wasn't too much of a shock that her and Tom got closer. I was however a little surprised that they'd end up having a child together and that in a more monstrous form, we'd see a tender side to Varg.

As for Tom - I definitely think this was one of his strongest stories and stuck in a magical environment, he managed to adapt to the situation pretty quickly. The idea both him and Lexi might forget their experiences together isn't surprising but it is rather sad as well.

- Benny might have gotten him a girlfriend in the shape of the bubbly but geeky, Alicia.
- Both Michael and Ursula only appeared in the second part of the story and Randall Moon was absent.
- Lexi is actually the same age as Tom - 17 and Nekross don't seem to care for meat.
- No secret plotting meetings this week with Jathro and Kooth.

This was a superb story. I have to admit, it did make me want to cry in parts and like I said earlier, it definitely seem to be a turning point story for both Lexi and Varg. I could easily see one of them becoming human and the other doing something heroic.