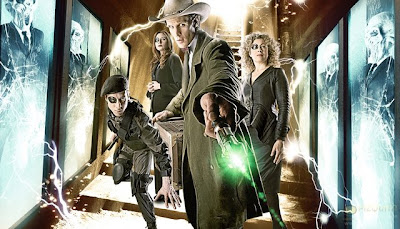 In news that might not come as a shock, it has been confirmed that both Karen Gillan and Arthur Darvill will be stepping down from their respective roles as married couple/companions, Amy Pond and Rory Williams. Steven Moffat has confirmed at a press event for The Doctor, The Widow And The Wardrobe that the characters will leave in a heartbreaking manner half way through Series 7, slated to air in late 2012. Moffat has also confirmed that he thinks both River Song (Alex Kingston) will return for the new series but he has also confirmed that a new companion will join the Doctor during the seventh run, though casting for 'him/her/it' hasn't been done yet.

Personal Thoughts: I'm not surprised. I was expecting this to happen in relation to Amy/Rory leaving but the heartbreaking bit worries me a little. Amy/Rory have endured a lot, I'm not sure I want to see them suffer. Still though, they've been amazing companions but at the same time, I am excited to see the new companion as well. I have a feeling casting will have to be announced in early 2012, even if we don't see them until the end of next year or the start of 2013. Here's hoping Amy/Rory's exit is the Christmas 2012 special. Surely they deserve it, right?

The Doctor, The Widow And The Wardrobe airs on Christmas Day on BBC1 at 7pm and filming for Series 7 begins in February 2012.
Posted by shawnlunn2002 at 4:32 AM