My Review of Dexter's 6x12: "This Is The Way The World Ends" 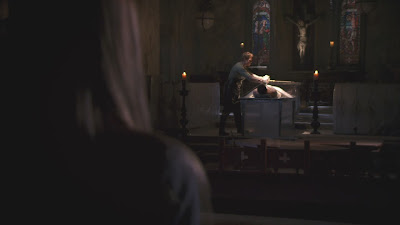 Well, this season has been about religion, so maybe Dexter’s final words of the sixth year are appropriate considering what just happened. You wait so long for a moment like this and it’s fantastic that when it happens, it still manages to come out of nowhere. Warning – there are spoilers here, so if you’ve not seen this episode, don’t read any further.

And if you have seen the episode, you know where I’m going with this already – Deb actually caught Dexter in the act of killing Travis. It was certainly a gratifying moment to watch but considering that she had headed to the church to declare her feelings for him, it made for an even more complicated reveal than usual.

I really, really do hate that the writers have decided that Deb somehow has romantic feelings for Dexter, even more so for the fact that the show didn’t need to resort to desperate shock tactics like this to boost attention and also due to the fact that this storyline has come out of absolutely nowhere.

I really don’t believe for one moment that Deb is in love with Dexter – I’m sorry but I can’t. I’m also hoping that now she knows her brother (yes, he’s her brother) also snaps some sense into her as well. I don’t want a Dexter and Deb romance but I also don’t see how one can come along anyways.

When Deb told Dexter she loved him and he replied the same, it was obvious that he meant it in a sibling manner. Dexter doesn’t have romantic feelings for Deb and I don’t relish the idea that her therapist would be encouraging Deb to drop that kind of a bombshell on Dexter. The writers need to drop this storyline and they need to do it fast. If anything, it’s going to cost them their credibility and no show can afford to lose that.

It’ll be interesting to see where they go next season with Deb knowing that Dexter is a serial killer. Will Dexter end up dispatching of her to protect his secret or is Deb going to have to turn a blind eye to her brother’s nocturnal activities (though she did catch him in the day). That’s definitely something I can’t wait to see unfold in 2012.

As for Travis himself – I cheered when he was killed. Not just because he kidnapped Harrison and would’ve killed him if Dexter hadn’t stopped him but because as a villain, he bored me senseless and I was happy to see the back of him. In the end, it was rather amusing how easily he was outsmarted by Dexter as well.

Here’s hoping that next year when it comes to a big bad, the next person is definitely more interesting than some ranting religious freak counting down to the end of the world. Sorry, Travis but it looked like your timing was off when it came to the expiration of Earth.

Thankfully though, you have been expired as a villain from our screens. Maybe in hell both you and the Skinner can lull over where you both went wrong as antagonists while Rudy, Miguel, Arthur and Jordan laugh at you. Stay away from Lila though.

As for next year’s villain – maybe it’s Louis. He did after all mail out that little parcel to Dexter and he’s also tried his hand at getting Masuka to keep him on at Miami Metro as well. I also doubt the writers would’ve bothered introducing this specific storyline if they didn’t intend to go further with it next year.

Last but not least – Quinn is going to pretend to have an alcohol problem so he can stop himself being transferred by Angel. Oh yay – so that means another year where Quinn can be an absolute liability, I can’t wait to see that. No wonder Angel was pissed off for most of this episode. Quinn really does know how to sour someone’s mood.

Also in “This Is The Way The World Ends”

There was a nice little subplot at the start of this episode where Dexter had to kill a robber after being rescued by a boat.

Dexter: “I guess it’s fitting I end up where I left so many others. I only wonder if the world will be a better place without me.”

The trailer for this episode made it look like Travis was going to kill Jamie. I’m relieved that she actually made it out of the episode alive.

Travis (to dead woman): “I can’t stay here much longer if you’re gonna stink like that.”

Dexter (to Harrison): “If some God or some force did save me today, I’m sure it was for you and not for me.”

It was nice to see Maria on Deb’s side over the latter’s attempts of capturing Travis during the eclipse but it doesn’t make up for her horrible behaviour this season.

Maria: “Matthews put his dick before the department.”
Deb: “And you cut it off. You didn’t hesitate to take advantage of that situation. Was that really the best for Miami Metro?”

Why did Travis borrow one of Dexter’s shirts and did no-one cop on that Dexter was in the beast picture at all?

Travis: “You’re supposed to be dead.”
Dexter: “How is the world going to end if the beast is still alive?”

Chronology: Picks up from where “Talk To The Hand” left off. Also Harry managed to not appear in this particular finale.

As a finale went, “This Is The Way The World Ends” was certainly better than a lot of the other episodes we’ve had this season but this has been a rather disjointed year and next year, the show is going to have to improve massively to regain its former glory.