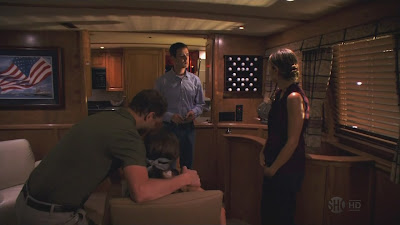 Dexter: “Travis is the only Doomsday killer and I’ve made a terrible mistake.”

At this point in time, mistakes like Travis are not ones you should be making. Did you not learn anything about Trinity after all? Then again, even I was convinced that Travis had a glimmer of redemption until the end of the previous episode revealed that Gellar had been dead and Travis was the Doomsday killer after all.

As a twist, it was a rather unsatisfying end and as Travis is the main killer, I wish I didn’t have to say this but I’m disappointed. I was hoping this religious fanaticism with the main big bad this year would offer something innovative to the show but as an enemy, Travis is now a bigger letdown than the Skinner was back in the third season.

Travis even couldn’t keep Dexter as a hostage and spent more time getting actively annoyed that Dexter was tampering with his blog than actually trying to catch Dexter himself, who let’s be honest was a bigger mistake for Travis than his releasing of Holly a few episodes back.

Speaking of Holly, the poor girl ended up having to suffer Travis’s wrath again when the madman and two newly acquired disciples held the woman captive on their boat before Travis ended up killing her. On the plus, at least one of those irritating followers of Travis wound up dead courtesy of Dexter.

Did I feel a glimmer of sympathy for Steve Dorsey when Dexter killed him? I most certainly did not. All Steve and his wife Beth did was serve as a horrible reminder that deranged whackos like Travis can actually inspire a following and while Beth showed some reticence over killing Holly, it was extremely difficult to sympathise with her either. Plus both Steve and Beth are complicit with Travis’s little Wormwood plan (an explosive of sorts) for his next masterpiece.

It also doesn’t look good for Angel who made the mistake of visiting Beth without back up (damn you, Quinn) and wounded up being knocked out by Travis. I wonder if this means that Travis will actually get a chance to kill someone from Miami Metro. I really don’t want Angel to die though. Why can’t Travis kill Quinn instead? Surely god-fearing psychos must have a stance against grade A incompetence, right?

If they do, then Quinn is a perfect candidate for a tableau. Let’s face it, it’s like the writers have given up trying to make viewers like him and have opted for him to spend this episode mostly drunk and unhelpful through and through. At this point, unless the writers don’t buck up their ideas, there really is no point to Quinn at all as a character on this show. I say kill him off once and for all. Maybe in death he’ll be useful than he is right now.

Speaking of useful, Deb’s latest therapy session seemed to be more productive than the one from the previous episode. Maybe because here it didn’t feel like Michelle was judging and also because Deb seemed to make another breakthrough about her relationship with Dexter. Dexter is Deb’s safe place – I got it but their relationship has also been changing for the last bit now. Maybe it’s time for Deb to find another safe place.

As for the whole debacle with Matthews and the dead prostitute, why do I still get the horrible feeling that will be Deb who ends up paying the price for this? By finding out that Tom was the last person to see Jessica alive; Deb has placed herself in an unenviable position. I’m beginning to think that by actually like a professional in this show, you suffer more than being incompetent. That can’t be right though.

Last but not least – Louis, you idiot. The last thing you should do is go to a man whose wife died at the hands of a serial killer and tell him about a computer game where you can be a serial killer as a player, even if the same man in question happens to be a serial killer. The writers missed an obvious emotional beat response when Dexter didn’t handle Louis’s game idea very well but I didn’t forget.

Also the thing with Louis – I can’t help but think his obsession with serial killers could go either two ways next series (assuming he’s in it). It could go that Louis ends up becoming a copycat killer or he ends up becoming the victim of a serial killer (not Dexter) but either way, I’m not sure if his hobby is going to remain simply harmless. By saying that, that also makes me worried for Jamie as well.

The title for this episode comes from the name of Holly’s boyfriend’s boat. The boyfriend in question was in Spain at the time.

Travis: “I proved it to you that you couldn’t be hurt.”
Gellar: “You stabbed me with a sword three years ago.”

Before his death, Gellar had told Travis to get professional help. It turns out that Travis really is the more fanatical of the two.

Dexter: “Maybe you’re pregnant.”
Deb: “First of all, fuck you and second of all, that would be the immaculate fucking conception since I haven’t been with anyone since Quinn and lastly, fuck you.”

Dexter (re Travis): “He’s been a monster from the start. He’s been using Gellar to justify his kills.”

As well as his sister, it also has turned out that Travis has murdered his parents as well in a car crash.

Louis (re computer game): “What do you think?”
Dexter: “I think this is offensive. Who would choose to be a serial killer?”

Funnily enough, there was a Dexter game out a couple of years ago. Oh and I loved the call back to “Seeing Red” in this episode too with Deb’s freak out in the church.

Harry: “When are you gonna let this go?”
Dexter: “When I kill Travis.”

Chronology: From where “Get Gellar” left off and it’s four days until the end of the world.

It’s usually at this point in the season where the ante feels well and truly upped but apart from Angel being in the firing line, there’s not much in “Ricochet Rabbit” that really feels eventful. Gellar has now felt like a waste of time as a potential threat and as the actual threat, Travis isn’t cutting it I’m afraid. I hope the final two can deliver though.