My Review of Doctor Who's: "Up All Night" 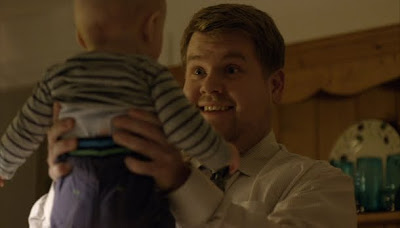 Craig (to Sophie, re Alfie): "I still can't believe I'm allowed him."

Aww, isn't that sweet? No, seriously, Craig, I think most kids out there would love to have you as a father. You're kind, funny and your sense of exasperation is rather endearing. Plus the Doctor thinks you're so great, he came to see you while on his farewell tour.

This little snippet dealing with Craig having to look after his son while Sophie went out with her mates was lovely to watch. It's a shame we didn't get to see as much of Sophie as we did in The Lodger but this was a nice way of making it up to viewers.

Oh and there's some nice sense of occurring as Sophie is intrigued by some of the recent disappearances while Craig frets about having to give Alfie a bath. Maybe this sounds trivial compared to the other scenes but it's a joy to watch nonetheless.

- The Doctor, Amy, Rory and River are neither seen nor mentioned in this mini-scene at all.
- This is basically also a prequel to Closing Time as well.
- Anyone not only see the electrics going off but also hear the Cybermen noise? I thought that was a lovely touch to this.
- Chronology wise, pretty could've been part of the opening to Closing Time.

A great little round up of this series of mini scenes. I really hope these Night And The Doctor style scenes factor into the next series because they've been a joy to watch.